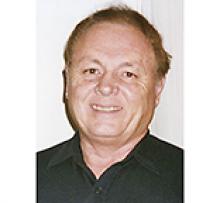 It is with great sadness, that we announce the passing of our loving husband and father, Frank Glen Stroppa. He was 87. His passing was a peaceful one; in his sleep in the early morning hours of January 14, 2021.
He is survived by his loving wife Theresa, daughters, Cynthia and Kathleen, son-in-law Don, and his grandsons, Christian and Alexander. In addition, he leaves behind his eight brothers and sisters along with their families, Armand (Dorothy), Sylvia (Ken), Jane, Susan (Randy), Gloria (Danny), Virginia (Rex), Roger (Sylvia), and Gina (Glen), as well as cousins, Juliette and Merle.
He is predeceased by his son-in-law Richard, his parents, Giuliano and Giacinta (known as Jenny), as well as his brother Danny and sister June.
Frank grew up in Winnipeg, graduating from Hugh John McDonald and Daniel MacIntyre schools. From there, he worked at the CBC as a Film Editor, then moved to Regina to work with Saskatchewan Agriculture and, later, Agriculture Canada as a Film and Television Producer. He travelled across Canada and around the world, including Mexico and Pakistan, in his work within government. Frank returned home to Winnipeg in 1988 to work with the Federal Government from which he retired in 1995.
Frank was also an entrepreneur, in the late 1960s and early 1970s, he produced commercials for local businesses, including Gondola Pizza, Winnipeg Transit and Teachers of Western Canada. In the 1980s he set up and ran a successful local business in Regina, Arrow Films.
Frank was always interested in understanding how things worked, whether it was a radio, a car or a computer. He enjoyed building and fixing things, which gave him a lot of pleasure during his retirement.
He was an outgoing, optimistic person who loved life and spending time with his family. He took great pride in his family, especially his daughters and grandsons. His passing leaves a hole in our hearts. He will be dearly missed.
Special thanks goes out to all the caregivers from Home Care who were such a great help to Frank in the last years we had with him.
Funeral Mass will be held at 10:30 a.m. on Wednesday, January 20, 2021 at St. Vital Parish, 1629 Pembina Hwy., Winnipeg, MB R3T 2G6. For those who wish to view the livestream service please visit www.stvitalparish.ca.