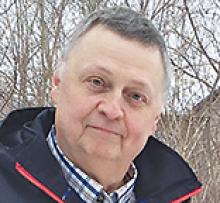 It is with heartbreak that we announce the passing of Dr. Douglas Warren Ruth - husband of over 50 years to Beverly Ruth, father to Chelsea Ruth, Kirstin Giroux (Stephan) and Whitney Siemens (Mark) and grandfather to James Douglas Ruth and Knox and Eddy Giroux. Doug was predeceased by his father Warren Ruth and mother Betty Ruth.
Doug was kind, accepting, encouraging, patient, funny and deeply committed in every one of the many roles he played in life. He was a true philosopher. He cherished his time with family, especially at the cabin where hospitality was extended to all. He considered all friends family. He saw the best in everyone and shaped the course of many lives. He was an inspiration. He loved rock and roll, building intricate decks, Egyptian history, and hieroglyphics. He loved to acquire knowledge. Many treasured photos show him reading with his grandsons through the years; Knox and Eddy have an impressive knowledge of Ancient Egypt due to him sharing his passions.
He travelled the world to grow and expand the engineering profession. He was known and respected worldwide for both his expertise and his work with students and colleagues at all levels of training, first with the University of Calgary and then at the University of Manitoba. He believed that Engineers were the Enablers of Civilization.
Dr. Douglas Ruth [B.Sc. (1970), M.Sc. (1972), Ph.D. (1977), P.Eng.] served as the Dean of the Price Faculty of Engineering at the University of Manitoba from 1999 to 2010, overseeing the construction of the Engineering and Information Technology Complex and further expansion of the Faculty's programs and services. In addition to serving as Dean, Doug Ruth was a core faculty member for more than 30 years. He was Head of the Department of Mechanical Engineering and Associate Dean of Engineering for Design Education. Doug was the second of the University of Manitoba's three NSERC Chairs in Design Engineering and championed new concepts such as Engineers-in-Residence and industry-based design courses, both of which have seen tremendous success with students. He was honoured as Dean Emeritus and he officially retired at the end of December 2018. Dr. Ruth's legacy was honoured many times within the Price Faculty of Engineering. In 2018, the laneway entering into EITC was officially renamed the "Doug Ruth Laneway" in recognition of his years of service to the Faculty and to celebrate his retirement.

He will be deeply missed and
fondly remembered every day.
Shine on you crazy diamond.

In lieu of flowers, donations may be made to the 'Doug and Beverly Ruth Centenary Award in Engineering', via the University of Manitoba website at give.umanitoba.ca/ fundsearch.
There is no service planned at this time.
We are collecting memories and stories as photos, video or email. If you would like to share or receive the final compilation, please email: RememberingDougRuth@gmail.com