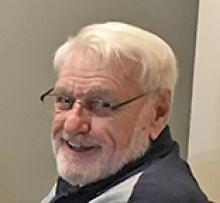 It is with great sadness that the family of Jean-Paul Guénette announce his passing at the age of 88 years with family by his side.
Jean-Paul was born in 1932 in Saint-Boniface and was the youngest of 10 children. Dad received his teaching degree from Saint-Boniface College and taught in several locations including, Riverton and Warren Manitoba. In 1964 he began teaching at Dakota Collegiate where he taught for 24 years, retiring in 1988. He then began working at Le Cercle Moliere until his retirement in 1998.
In 1958 he met the love of his life, Lucille (Thibodeau), a student nurse. They were married in 1960 and went on to have four children, 10 grandchildren, and four great-grandchildren. They enjoyed doing many things including golfing, camping, and going to their cottage. They also enjoyed travelling, taking many trips and cruises, which included Hawaii and the Panama Canal, among others. In 2015 Dad took his entire family, children and grandchildren to Cuba for Christmas, a memory cherished by all. Above all, Dad enjoyed spending time with his family and grandchildren.
Jean-Paul was an avid snowmobiler and spent many weekends at the cottages riding the trails. He continued to ride until the age of 82 years.
Dad was predeceased by his loving wife of 56 years, Lucille; by his parents, Jules and Berthe; by brothers, Gerard, Aime, Maurice (Blanche) and Georges; and by his sisters, Lucille (Lucien Seguin), Florence, Alice (Paul Auger), Therese and Simone (Graham Stinson). He was also predeceased by his brothers-in-law, Tom O'Connor, Lucien Seguin, Paul Auger and Graham Stinson.
Jean-Paul is survived by his children, Marc (Brenda), Richard (Yvette), Suzanne (Rob Fiola), and Nicole; by his grandchildren, Dylan (friend Alex), Shelby (Jayson Magnifico), Patrick (fiancée Jaime), Sophie (friend Mathieu), Nicholas (fiancée Jessica), Miguel (friend Sarah), Katrina (friend Rylan), Chantal, Stephanie, and Sebastien (friend Sarah); by his great-grandchildren, Charlize, Beckett, Tealiah and Luxton. Jean-Paul is also survived by his sister Sr. Germaine Guénette, RNDM; and sisters-in-law, Blanche Guénette, Therese O'Connor, Irene (Gary Kind) and brother-in-law Douglas (Fern) Thibodeau.
Due to Covid restrictions a service will be held at a later date.
In lieu of flowers, donations may be made to the Alzheimers Society, CancerCare Manitoba or Fonds Lucille et Jean-Paul Guénette Endowment Fund (Francofonds).