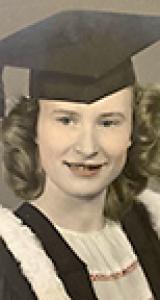 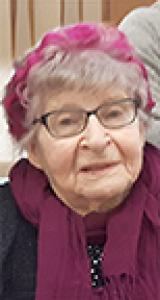 It is with many tears and heavy hearts, we announce the passing of our beloved Mom, Grams and GG (Great-Grams), Muriel Alice (Bowes) Hewins, wife of the late Edward (Ted) Hewins, at the still feisty age of 92. Mom went home to join Dad peacefully in her sleep on January 8, 2021, and we all know she will be like a new bride to be back with her love and smiling happily down upon us all.
Mom was born in the family home on the farm in rural Portage la Prairie, Manitoba to Les and Alice Bowes (both deceased). Mom was born a preemie February 14, 1928 (and just about passed when she was born), a sister to her older brother, Keith, later to be a big sister to Joyce. Muriel grew up in the post war era in rural Portage, developing a love of music with the barn dances her parents, Les and Alice hosted for many years. Her favourite was the Hawaiian Guitar that she earned when her dad told her he would buy for her if she would get up and play in front of the dance guests. She did and there was no turning back playing both the steel guitar and the piano. She attended the Nairn School that was a mile from home and then Portage Collegiate High School.
Once graduating from high school, Mom attended the University of Manitoba completing a Degree in 1949 in Home Economics. Mom married her school sweetheart, Ted, on December 4, 1948 and welcomed their first-born son, Garry, February 22, 1950. Muriel and Ted moved to Fort St. John, BC in 1955, so Ted could work for Bowes and Herron Chev Olds.
Muriel worked for the North Peace Secondary School, as a secretary to the principal, Mr. P until welcoming their second born, Darren, December 2, 1959. Mom and Dad never had any more of their own birthed children, they chose to expand their family by fostering children and eventually adopting five more into their family over the next few years. In 1962, son Dwain permanently joined the family, followed by daughters, Wanda and Shannon (sisters by birth) in 1963. Mom and Dad continued to take in foster children, and Mom added to the busy home by babysitting as well. Mom and Dad worked together to achieve their goal of giving children the best start in life, as time went on Mom and Dad also welcomed daughter Michelle and son David permanently to their family.
Mom was busy with her family of seven, also managed to sell Avon for several years, then Nutrimetics Skin Care. Mom was also a cheering hockey mom and as time slowed down Mom was part of the Red Hat Society and the University Women's Club of Portage. Mom also loved to sing with Dad as he played his guitar in church and many home sing alongs. They belonged to the St. Mary's Anglican Church and the Highway Tabernacle Church.
In 1968 Mom and Dad bought Uncle Earl Bowes's farm in Portage la Prairie, MB then the road trips started, moving the entire family --- six kids, five cats and a dog - back and forth between two homes for five years, spending the spring, summer and fall in Portage and back to Fort St. John for the winter. Crazy times, eventually settling back in Portage la Prairie. There Mom and Dad farmed for several years, started a Bed and Breakfast for guests on their property, participated in the farmer's market with their love of flowers: gladiolas, lilies, and raspberries bushes galore, wherever Dad was, Mom was right beside him. Mom and Dad were also able to celebrate their 50th wedding anniversary alongside a large portion of their immediate and extended family and friends.
Predeceased by her parents, her brother and loving husband, Muriel leaves to mourn her passing her sister Joyce Ray (Mike) of Windsor, ON; Audrey Bowes (special cousin) of Toronto, ON: her children, Garry Hewins and Anita Balch, Wanda and Merlin Gerber all of Fort St. John, BC, Shannon Hewins and Dale Stamper of Calgary, AB, Dwain Hewins, Darren and Candace Hewins all of Portage la Prairie MB, Michelle and Glenn MacMillan of Marquette, MB, David Porter of Winnipeg, MB, 14 grandchildren and 13 great-grandchildren, several cousins, nieces and nephews.
Mom will truly be missed but she will live on through our memories. Mom's family will hold a Celebration of Life at a later.
Please click on website to view service.
In lieu of flowers, donations can be made to PAWS, 121 - 12 St. NE., Portage la Prairie, MB R1N 4A2.