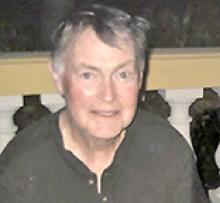 It is with heavy hearts and great sadness we announce the passing of Jack. He was predeceased by his wife Irene; daughter Monica; his parents; sister Chris and brother Bob.
Jack will be lovingly missed by his grandchildren, Haley, Carly and Chad; son-in-law Mike; his special nieces, Beverly and Robyn; nephews, Scott and Jimmy; his great-nieces and nephews; and sister-in-law Dot. He will also be missed by his extended family, goddaughter Jennifer Mazur Burnell and family, Linda and Nancy Mazur and family.
Jack was born in Winnipeg where he grew up and attended George V. Grade School and Lord Selkirk High School. He excelled in athletics during his school years. At completion of high school, he was awarded a scholarship to McNeese State University in Lake Charles, Louisiana in track and field.
In his years at McNeese he won many track and field events, distance races and was one of their foremost track stars on the college running team in the 1956 Gulf State Conference Championships.
His awards in athletes during this time are far too many to mention, however, he also earned honourable mention on the Dean's List which helped him in his post graduate work in physical education.
Jack continued his education at Southern Illinois University and completed his PH.D there.
After graduation Jack returned to Winnipeg and taught physical education in the River East School Division until retirement with the exception of a hiatus teaching for the Canadian Forces Base in Lahr, Germany.
After Jack went to Germany, he and Irene decided to tie the knot and Irene flew to Germany where they got married. The four years they spent in Germany, their vacation time was spent travelling Europe, Russia, Egypt and on an African Safari. They enjoyed much cross-country skiing and wine tasting. They made many lifelong friends during their time in Germany.
Physical fitness was an important part of Jack's life. He continued to work out at the gym three or more hours a day up until months before he passed. He was an avid cross-country skier, cyclist, canoeist, and rollerblader. He ran marathons in several cities across the continent including The Boston City Marathon (by invitation we must add). However, Jack was most proud of the last two marathons he ran in Winnipeg and Minneapolis when he was 76 years young.
Jack was an avid reader who belonged to a very special book club with close friends until his passing. He also continued to meet with his classmates from McNeese who lived in Winnipeg for coffee about once a month. He enjoyed bird watching, building bird houses, walking his dog, eating ice cream and enjoying the odd glass of brandy.
Above all else was Jack's love of Grand Beach at his family's cottage, Frater's Corner where many wonderful memories were made. As a young lad, Jack spent all of his summers at the beach. Some of his jobs there were delivering papers, delivering blocks of ice, and carrying suitcases from the train. His recollection of these simpler, romantic times always brought a twinkle to his eyes, a grin to his face and a tone to his voice that was saved for these special stories.
Jack was passionate about the Grand Beach Community and over the years accomplished much for the area. He helped organize the very first Bike rally, the Frog Jumping Contest for the children and helped establish the basketball court. He organized and was head of The Legends of Grand Beach Committee. A gathering was held at the end of each year which included a dinner, the awards ceremony and a dance. The year Jack retired from the committee he was awarded and became a Legend himself.
He truly was a Grand Beach legend. The beach was his happy place. Jack lived his life to the fullest. He will be greatly missed by all but never forgotten.
The family is grateful to the nurses and doctors who cared for Jack during his months on 3 North at Grace Hospital. In lieu of flowers, donations may be made to the St. Boniface Hospital Foundation or to the Winnipeg Humane Society in Jack's name.
Due to Covid 19, a celebration of Jack's life will be announced at a later date.