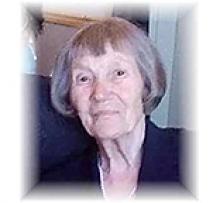 With sadness and peace in our hearts, we announce the passing of Nina Bodnarchuk (nee Zuk), beloved mother, grandmother, sister, aged 94, at Seven Oaks Hospital.
Left to cherish her memory are her daughters, Lesia (Nelson) Szwaluk and Patricia (George) Pankewycz. Baba will be sadly missed by her six grandchildren, Oksana (Odin), Wolodymyr (Svitlana), Chris (Karley), Taisa (Craig), Talia and Maxim; family in Belarus, Canada and USA. Nina was predeceased by her husband Wolodymyr (Walter 1999), her daughter Orysia (2017).
Nina was born in Rudka, Poland on March 30, 1926 to Ignacy Zuk and Antonina (Potapchuk) being the eldest of her brothers and sisters. Our mom was 15 years of age when she was taken to work as forced labour in Germany. While in Germany during the Second World War she met her husband and lifetime partner Walter. On May 17, 1947 she married the love of her life in Mainz-Kastel a displaced person's camp. On November 30, 1949, they both arrived via Halifax settling in Augusville, Manitoba, soon after they moved to Winnipeg, where Mom held various jobs, spending most of her employment at Old Country Sausage, retiring at 65. She met many of her lifelong friends during her employment at Old Country Sausage.
Her favourite time was the gathering of family after Sunday Divine Liturgies, sharing her meal that she prepared. The family looked forward to her famous refrigerated pineapple cheesecake. Every February she converted one bedroom to a garden planting tomato seeds, a tradition she started with her husband and continued after his death.
Mom was a very strong individual, soft spoken and a loving Baba. She enjoyed travelling with her husband attending various Ukrainian festivals in Manitoba, Canada's National Ukrainian Festival in Dauphin, MB being their favourite. She enjoyed fishing with her husband but was the one that mastered the art of fileting the fish.
She was a member of Sts. Volodymyr and Olha Metropolitan Cathedral, Canadian Ukrainian Institute Prosvita and with her husband's involvement with IPAC was responsible for laundering the teams' uniform.
The family would like to extend their sincere thank you to the staff of Seven Oaks Hospital 4th floor Unit 12, especially to Denise, Tracy, Glen and Jessica, as well to Dr. Taras Babick her family doctor.
If friends so desire, donations may be made in her memory to the Shevchenko Foundation 202-952 Main Street, Winnipeg, MB R2W 3P4.
Due to Covid-19 restrictions, a private funeral service will be held on January 26, 2021 at 11:00 a.m. at Korban Funeral Chapel by Fr. Ihor Shved.
The funeral service and interment will both be live streamed through Facebook (link on top left corner of the Korban Funeral Chapel website).