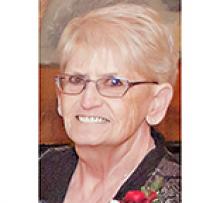 Peacefully, with her sons by her side, Gwen passed away after a long battle with heart failure.
Gwen is survived by her two sons, Andrew (Krista) and Wayne (Sara); granddaughter Ilaria; brothers, Robert and Ken; sisters, Dorothy and Janet, as well as numerous nieces, nephews, and friends.
She is predeceased by her parents, John and Olga; sisters, Ella, Irma, Kit, Marjorie, Mary, Ruth and Delores; and beloved kitties, Sarah Jane, Bud, Gator, Trooper and Tatyana.
Gwen grew up in Drake, SK and lived there until she moved to Winnipeg when she was in her teens. She moved to Neepawa later in life and lived there until 2020, when she made the decision come back to the city so she could be close to her sons, their families, and her granddaughter who was the absolute light of her life.
Family was everything to Gwen. She visited and talked to her sons as often as she could, and when travelling from Neepawa became difficult, she learned how to face-time with her granddaughter so she could see her as often as possible. Gwen was especially close with her brother Bob in BC. In earlier days she would visit him often, and later they would talk on the phone frequently. Bob sent delightfully ridiculous birthday cards to Gwen all through the year, and they were always the highlight of her day. She was a big kid at heart, and often had movie nights (horror movies, no less) with her boys when they were younger and loved to play video games with them.
Gwen had a very special place in her heart for cats. Through the years she had five of her own, and then later her grandcats who she spoiled.
In lieu of flowers, we ask that you make a donation to Craig Street Cats in Gwen's name.
Cremation has taken place, and a gathering will be held when it is safe to do so.

Condolences may be left on Gwen's memorial page at www.interlakecremation.ca