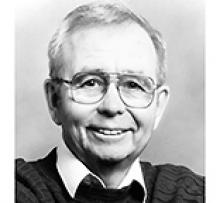 Born to uneducated parents (Harvey Loren and Grace Pearl Williams) on the cusp of the Great Depression, Harvey obtained a BS at the University of Washington and his MS and PhD at Oregon State University and became a professor of science education at the University of Manitoba. Having grown up in forested Grays Harbor Co., Washington State, and aware that his own rise was made possible by public education and other public programs, he was a lifelong advocate for education and the environment.
In 1950, Harvey married Imogene Bryant Williams. He is survived by four children, Ruth, Rachel, Loren and Rebecca and five grandchildren, Nicolo Maurice, Sandor Maurice, Rose Saporito, Justin Williams and Leif Woodford; and four great-grandchildren.
Harvey is also survived by his second wife, Maida Bird Neilson. Forty years of work, advocacy, travel and mutual support created a deeply loyal bond between them. He is survived by three stepchildren, Patrick, Gordon and Laura; and three grandchildren, Alexandra Neilson, Michael Neilson and Brianne Rogers. He is also survived by Allen Spigelman, his bonus child
Harvey served in the US Marine Corps in Korea. When he was discharged in 1951, he obtained a teaching certificate while working at Boeing in Seattle. He taught science in Sultan, WA and in Seattle. He was a founding member of the Seattle Teachers Association. He was also a leader in the Democratic Party, and ran for state legislature in 1958.
In 1969, he taught at Bemidji State University, before moving to the University of Manitoba, Winnipeg, in 1971, where he spent the rest of his career as a professor of science education. In the 1980s he landed a large IBM grant which financed Project Prometheus, the purpose of which was to integrate computer technology into the classroom. Harvey became a Canadian citizen in 1978.
A dedicated environmentalist and political activist, he was president of Nature Manitoba, on the board of Canadian Parks and Wilderness Society and the National Parks Board. He was instrumental in the development of Wapusk National Park in northern Manitoba.
In 1997, Harvey and Maida moved into their condo in Victoria, BC. They found the building in disrepair and the finances in disarray. Not content just to make these things right, Harvey helped revitalize the Vancouver Island Strata Owners Association and answered the helpline for many years.
In honour of Harvey's memory, donations may be sent to the Canadian Parks and Wilderness Society (cpaws.org).