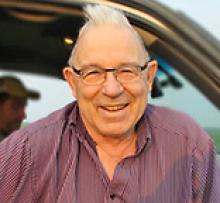 Comforted by the presence of his children, Michael (78) passed away peacefully at the Saint-Boniface Hospital on Saturday, January 16, 2021, where his decades long battle with medical issues came to an end.
Raised in Glenlea, Michael attended the University of Manitoba and graduated with a degree in Agriculture. He married his first love Claire in 1969, and built a home on the farm where they raised their children. They were married for 32 years before Claire's passing in 2001. Michael was blessed to find love once again when he married his childhood sweetheart Anna Labelle in 2004 until her passing in 2017. Michael was the embodiment of resilience and unfaltering positivity despite facing so many health challenges and enduring the loss of his two loves. His gregarious personality, beaming dimpled smile, and warm hugs were never in short supply; as were his diplomacy and humility - crucial traits in a family business where the livelihood of all those you love are at stake. He valued integrity, hard work, and initiative and devoted his life to the continued growth of the Bartmanovich Farm, a pioneering Centennial farm now well into its fifth generation.
Michael gave back to his community in so many ways: as a proud member of the U of M Agriculture Alumni Association, contributing to their involvement in the education of young farmers; through the Knights of Columbus as an honorary lifetime member, and through his longtime parish family of Mary Mother of the Church.
Mike was foremost a first class farmer who dedicated his life to the family endeavour, and as a lifelong learner he relished new knowledge. He was a skilled mechanical diagnostician, able to distinguish the grind of a gear or the screech of a bearing over the deafening rumble of an engine. Being an avid outdoorsman, fishing and hunting were activities that brought him much joy. His trips with "the boys" were legendary events: fishing and hunting came second to teasing, joking, regaling, and enjoying each other's company. Trips to the cottage brought Michael's family and friends together, surrounded by the beauty of nature. Mike's garden boasted an abundance of vegetables, fruit, and flowers which he wholeheartedly shared with all those he could. In his retirement years, Michael discovered travel; visiting his family's ancestral homeland of Poland, the mountains of Switzerland, the piazzas of Rome, the arches of Paris, the beaches of The Bahamas, and the snow of Montreal. His experience aboard the Rocky Mountain Express with Anna was the trip of a lifetime for him.
He will be lovingly remembered by his children, Ryan (Mona) and Michelle (Rick); his siblings, Ron (Susan), Verna (Ken), and Joyce; brother-in-law and close friend Maurice (Diane); nephew Doug (Jane); nieces, Kristine (Rob) and Christina; grandnephews, Tyler, Thomas, Garrett, and Eric; grandchildren, Connor and Olivia; and numerous other family members and friends.
Michael is predeceased by his parents, Rose and Ludvic; his wife Anna Labelle; and his first wife, Claire, the mother of his children.
The family would like to thank the medical staff at every hospital in Winnipeg for the many years of care provided to Michael. Your devotion and kindness in his many moments of need will not be forgotten. A special thank you to Dr. James Brian Sharkey, Michael's physician and friend, who always took his phone calls, offering healing of the soul as well as the body.
Memorial donations may be made to the St. Boniface Hospital Foundation.
Due to current COVID restrictions, a celebration of Michael's life will be held at a later date.