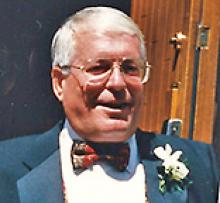 It is with deep sorrow that we announce the passing of Doug Finch, husband, father and grandfather, at the age of 83 years, at the Health Sciences Centre in Winnipeg.
He is survived by his loving wife of 32 years, Penny Finch. He will also be sadly missed by his son Craig (Angela), daughter Tannis, and daughter Tracey (Brett) and their mother, Gwen Smith. Also mourning his loss are his grandchildren, Carter, Zander, Drew, Tyler, Phoenix and Marigold; as well as his brother Robert of Edmonton.
He was predeceased by his parents, Frank and Eileen, and his sister Peggy (of Toronto).
Doug grew up on Hazeldell Avenue and was an E.K. boy to the core. He was proud to say he graduated from Miles Mac High School. A short time later he became very involved at the Kildonan Canoe Club where he had many lifelong friends, fun times and exciting adventures. Some of his favourite pastimes were boating, water skiing, dancing and socializing.
He was also an avid curler for many years and spent many happy hours at Rossmere Curling Club, as well as participating in a few favourite bonspiels.
Doug began his work career as a clerk in the CPR data processing centre. From there he branched out to become a sales representative for Nabob Foods - covering western Manitoba. That led to a job with the federal government Statistics Canada office from which he retired at the age of 54.
Doug was a friendly, outgoing person and collected many friends as he travelled the paths of life.
In his later years, he enjoyed living in Windsor Park, and eventually he and Penny settled on a life of leisure at Dakota House.
Due to Covid-19 restrictions, there will be no formal service. Cremation has taken place. Final resting place is at Glen Lawn Cemetery.
Doug was a dedicated blood donor throughout his adult life so, in lieu of flowers, the family asks donations be made to Canadian Red Cross, https://www.redcross.ca/donate/appeal/donate-to-the-canadian-red-cross-fund#a0650cb6-ce29-4c40-b663-e749a0a9163f