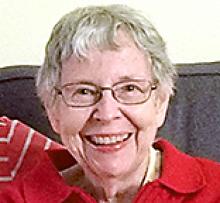 Patricia Marie Walker (Baumgardner) of Winnipeg, Manitoba, died Tuesday, January 19, 2021, from dementia. She was 81.
Patricia (or Pat, as everyone knew her) was the kind of person who could do anything she set her mind to. So, she set out to do many remarkable things. And she did them all well, with great skill and enthusiasm.
Growing up in Springfield, Illinois, Pat nurtured several passions that would shape her life. Pat was the kid who always had her nose in a book, soaking up knowledge like a sponge. Over her life she would amass thousands of books; an eclectic, extensive, well-organized collection of literature, histories, mysteries, and non-fiction.
Pat was also the kid who was always ready to grab her bat and glove and head to the neighbourhood diamond, where she insisted on playing first base. She passed on her love of baseball, and the Chicago Cubs in particular, to her children. Football, hockey, curling -- over the years she would watch them all. And she would gladly fly 1,000 miles to cheer on her grandkids on the basketball court or on the ice.
As a child, Pat also developed a passion for music that would remain throughout her life. As with her books, Pat's musical tastes were broad - she loved everything from Chuck Berry to Gustav Mahler. And though she never would claim to have an outstanding voice, it was good enough to be part of the Springfield High acapella choir, and good enough to be part of Slainte Mhath, the Celtic group that regularly featured at the Scottish pavilion at Folklorama.
Inspired by stories her father brought back from the Second World War, Pat had a lifelong desire to travel. A combination of restlessness and a well-deserved scholarship took her to Knox College in Galesburg, Illinois. There, she met her first husband, John Badertscher. The young couple would do plenty of travelling in the early years of their marriage, living in Brooklyn, Cleveland, and Chicago (adding three children along the way) before settling in Winnipeg, home for her final 50 years.
The travel bug stayed with Pat. Armed with an endless supply of guidebooks and maps, Pat meticulously planned epic summer road trips that took her young family all the way from Newfoundland to the Rockies to Alaska, with everyone somehow jammed into a Ford Galaxie 500 station wagon.
All those maps, and the National Geographic magazines that they came in, point to one of Pat's most important traits - her unshakable belief that all people are equal in dignity and worth and rights. You could see this by how she fiercely advocated for her oldest son, Chris. Although Chris was born with a brain tumour that precluded him having a "normal" existence, Pat refused to consider placing Chris in an institution. Rather, she did everything in her power to help Chris live his best life.
Pat's belief in equality drove an abiding interest in, and respect for, all peoples and cultures, particularly the indigenous nations. Long before territorial acknowledgements were the thing to do, Pat knew she was living on Treaty One land, the home of the Anishinaabeg, Cree, OjiCree, Dakota, and Dene, and the homeland of the Métis Nation. Pat was a born anthropologist, a field that she studied at the University of Manitoba as an adult and turned into a career as an archaeologist with Manitoba Government. She shared this career with her second husband, Peter Walker, along with their love of music, travel, and good food.
Throughout her life, Pat was a mentor to countless people. From her beloved younger sister, Lynda, to her childhood friends, to her own children, to the archaeology crews she led on digs across Manitoba, to the kids who lived next door, to the many whose lives she touched over the course of her personal and professional life, Pat was someone to look up to, and the world is poorer for her passing.
The daughter of Lyndal Baumgardner of Naples, Illinois, and A. Catherine (Baggs) of Ashland, Illinois, Pat was predeceased by her husband Peter Walker and her son, Chris Badertscher. She leaves behind an extended family that includes her sister Lynda Fein Chilton, nephews, Blair and Ari Fein and their families in Springfield. She also leaves daughter Elisabeth Woolner (Derek), son Paul Badertscher (Tania Costanzo), stepson Graham Walker (Susan Powder), stepson Dane Walker (Nicole), stepdaughter Anna Walker (Jessie Gibb), eight grandchildren and one great-grandchild.
Given the current pandemic, there will be a private interment at the cemetery of St. Andrews on the Red. A public celebration of Pat's life will take place later.
In lieu of flowers, Pat's children request that donations be made to Indspire, an indigenous charity that invests in the education of First Nations, Metis, and Inuit people, or to the Manitoba Museum.