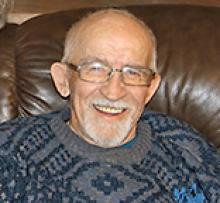 With heavy hearts we share the sad news of the peaceful passing of Doe, beloved husband, father, grandfather and great-grandfather. He passed at home with his wife Fran by his side.
For the past several years Doe had a battle with cancer. He stayed strong and always had a sense of humour.
He was predeceased by his parents, Emil and Agnes (Belisle); brothers, Maurice and Felix; sisters-in-law, Mary and Brenda; a grandson David; and a great-grandson Maximillion.
Doria and Fran had six children, June Charison (Curtis), Daniel Gauthier (Deb), Michel Gauthier, Monique Ruchkall (Richard), Elise Hawryluk (Darcy) and Paul Gauthier (Trena). Doe had 11 grandchildren, Cameron (Whytnie), Jodie (Nicole), Shane (Precious Joy), Celia (Jan), Hope, Corey, Kyle, Megan (Colin), Amanda (Terry) and Janae. Doe had 14 great-grandchildren, Chloe, Ryan, Brady, Hadley, Mayla, Levi, Jaxon, Peyton, Jazzlyn, Jagger, Nate, Nixon and Zayden. Included in his family circle are ex-daughters-in-law, Connie and Tara. Doe dearly loved and was so proud of all of his family.
Doe was born to Emil and Agnes, and was the third born of four boys; Maurice, Ralph and Felix. He had a few years of primary school, but quit to take care of his older, blind brother while his parents worked. At a young age he sought out employment. Doe worked at various jobs; he worked at the bakery Robinson Shortbread, as a delivery driver, a gravel truck driver, worked at Independent Fish, Simpson Sears as a roofer, a sanitary engineer, he worked for the city of St. Boniface in the water department checking water levels during flood season, and worked at Quality Construction. He was a jack of all trades. He moved with his family to Gunton, Manitoba in 1970, and soon after took a job with Charisons Turkey Hatchery, and later at Maksymyk Homes. Then he became a self- employed general contractor. Doe learned his trade of carpentry from his father, and a lot of it was self taught. He worked hard his entire life until the age of 80. One day he had difficulty putting a set of stairs together and he knew it was time to put down the hammer and hang up the tool belt. He loved working, and enjoyed his many jobs and the interaction with his many, many customers; some of whom became very good friends.
He married the love of his life, Fran Roy, in April of 1958. They resided in Winnipeg and Gunton, Manitoba and in 1987 they moved west to Egremont, Acme and then on to Bashaw, Alberta where Doe and Fran owned and operated a motel for five years. Then from Bashaw to Glade, BC where Doe absolutely thrived living right next to the Kootenay river, and he loved the waterfalls in the bush right in his back yard so to speak. In the fall of 2019, his ill health brought him back to his Manitoba roots, where he lived in Lac Du Bonnet until the present time.
Doe was proud of his Metis roots and they really shone through with his love of nature and the wilderness. He hunted, fished, trapped, and loved berry picking. His other loves were his family and friends, dogs, the goose and the moose, motorcycling (in his younger years), old time country and fiddling music, dancing and jigging; he loved to party, gardening (for the cucumbers and beans), hockey (his Montreal Canadiens and then the Winnipeg Jets), black forest cake, Chinese food, and his beer. He was such a friendly guy who took up a conversation with anyone, anywhere, and walked away having made a new friend. He especially liked his coffee clutches where he could shoot the breeze with the guys. He played the lotto tickets and always had one either in his pocket or in his truck. He had quite a refined palate; he ate with his eyes and his comment was always nope don't like that. Doe had a stubborn streak and his opinions. If someone or something ruffled his feathers, it was a constant source of angst for him and all those who heard about it over and over again. He certainly was one of a kind. Doe said he wanted to return in his next life as a goose.

"Let the wide open skies be your domain
and you be the lead bird in your echelon.
We'll give a quick wave and call out your name, so long for now, we all love you."
We miss you deeply and will forever
treasure your memory in our hearts.