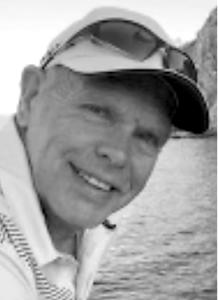 BAYES: George Harry, September 27, 1948 ~ January 15, 2021. George Harry Bayes passed away surrounded by family in Beaumont, AB on Friday, January 15, 2021 at the age of 72 years. Dad will be remembered as our courageous, fun-loving, dependable and adventurous father. He was born to Fred and Florence Bayes on September 27, 1948 in Minnedosa, MB. George spent his childhood in Minnedosa. After graduating high school, he followed his childhood dream and joined the R.C.M.P. His postings were in Alberta, where his experiences gave him confidence and prepared him for what life would bring. After his exciting R.C.M.P. career, George had the opportunity to take over the family business in partnership with his brother, Bob. The farm equipment dealership was a natural fit due to his social abilities and business skills. After close to 20 years, George sold the dealership and made his first failed attempt at retirement. It wasn't long before the farm equipment industry drew him back into the capacity of marketing and special event planning. The seasonal nature of this job allowed George to focus more on the ever-expanding family hobby farm. With the home farm operating efficiently, Dad attained his private investigator license, and worked in the field of agriculture once again. After he sold the farm in Manitoba, he moved to Beaumont, AB to be closer to his family. Dad was well known for his love of travel which complimented his adventurous spirit for all outdoor adventures. He was always there to lend a hand, and become project manager as we enlisted him for our frequent renovations. We supplied the pie and the many band aids. He was a great father which prepared him to be an exceptional grandfather. Dad loved to be with family and has given us endless memories to cherish.
Left to cherish his memory is his partner, Charlotte Lehman; his three children, Andrea Sawicki (Leigh), Chad Bayes (Cheryl), Carrie Bayes (Elaine); four grandchildren, Kaylene, Kylelee, Teryn and Layne Sawicki; brother Bob Bayes (Holly), sister Kathryn Cairney (Bill); as well as nieces, nephews, relatives and numerous friends. George is predeceased by his parents Fred and Florence Bayes, and sister-in-law Deirdre Bayes. Due to Covid, a memorial will be planned during a safer time. Donations in memory of George are gratefully accepted to the Cross Cancer Institute in Edmonton.