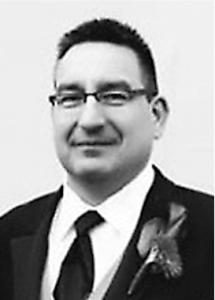 MELNYK: Laurney 'Lorne', age 50 years old, passed away suddenly but peacefully with his wife by his side on Thursday, January 7th, 2021 at the Brandon Regional Health Centre. Lorne was born in Brandon on October 4th, 1970 to Walter and Elaine "Shirley" Melnyk. Lorne attended and graduated from Crocus Plains high school and then went on to Brandon University to pursue a degree in Chemistry. He spent his youth working odd jobs, then on to fulltime careers at Wyeth Ayerst, General Dynamics (Calgary), Wave Rider Com (Calgary) and then settling into a position with RFNOW. Lorne always had a passion for new, exciting things when it came to computer software design and anything technical and he met a lot of great people along the way doing just that. While at Brandon University he took a fondness to the sport Fencing and ended up teaching several classes at Brandon University in the late 1990's. Several years later, after obtaining his black belt, he had the opportunity to teach various classes at Kirin Martial Arts Club up until his passing. He enjoyed the Kirin students and instructors immensely. He always made sure there was a fun aspect involved in the learning process. He loved the excitement the students brought to class each day. Lorne had many other interests and talents including violin, golf, software design and helping Abigail with her high school studies in Chemistry. Lorne was a great sushi maker and friends and family would look forward to the annual Sushi Night each New Year's Eve. Lorne loved the outdoors, he often spent time gardening, building outdoor sets or simply just enjoying the yard with his beloved dogs Paige and Reo. Reo was often by his side, when driving kids to school or running errands. Lorne made sure Reo always had the front seat in full co-pilot mode. Lorne lived his life with care and compassion and was always there to lend a hand no matter who asked him. He was predeceased by his parents Walter and Elaine and brother-in-law Jamie. Lorne will be greatly missed and lovingly remembered by his wife Suzie, and children Abigail and Derek. His sister Betty (Scott) Holmes, brothers Reg (Anne), Barry (Amy), Kevin (Heidi), Don (Teresa), brothers-in-law Jamie (Shelley) Newman, Tim (Brenda) Newman and numerous nieces and nephews. The family would like to thank the many doctors and nurses that cared for Lorne. A celebration of life will be held at a later date. Donations in memory of Lorne may be made to KidSport, 145 Pacific Avenue, Winnipeg, MB, R3B 2Z6 or charity of choice.

Expressions of sympathy
may be made at
www.memorieschapel.com.
Rest in peace Lorne you
will be missed by many.