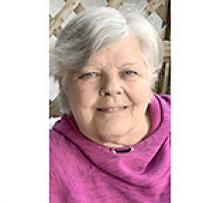 Patricia passed away peacefully on the morning of January 22, 2021 after a short courageous battle with cancer.
She will be forever missed by her husband William (Bill) Reid; his daughters, Jennifer Jeanson (Greg), and Shannon Reid (Mike). She was a very proud, loving "Grammy" to her beloved grandchildren, Brianne Baricz-Ives (Kyle), Alexander Jeanson (Kayleigh), Nathan Zettergren and Rylan Zettergren.
Pat will be lovingly remembered by her sister Marilyn Grant (Chuck); brother Dwight Dilts (Nancy); sister-in-law Diane Dilts; sister-in-law Leah Paul (Ralph); as well as numerous nieces and nephews. Pat was devastated when she lost her sister Leslie Boyd on December 2, 2020; and her brother Rhett Dilts on November 22, 2020.
Pat was born in Winnipeg to Everett and Marguerite Dilts. She grew up in sunny St. James, and spent the summers with her family in Minaki. She loved an adventure, and her passion for travel started with a backpacking trip through Europe as a teenager. She worked in sales for Eaton's, and then began a career with Scotia Bank. Pat then decided to go back to retail with a new clothing store, Bretton's. When the store closed, Pat along with her husband Bill, opened a travel agency specializing in cruises, CRUISESHIPCENTERS. Cruising had become a major passion for them, and they were fortunate to travel on 48 cruises over the years.
After Bill retired, Pat was offered a position back in banking with Royal Bank, where she worked until her retirement in 2010. After her retirement, she and Bill purchased a winter home in Mesa, Arizona. They enjoyed their winters in the south and made many new friends over the years. They made their last trip to Mesa in 2020; it was after their return home that it was discovered that Pat had cancer.
Pat loved time spent with family, and cherished the memories of gatherings at Marilyn and Chuck's home in Lac Du Bonnet, the Dilts family Boxing Day parties, as well as countless game nights and celebrations at Leah and Ralph's.
Pat was a beautiful and kind person both inside and out. She had an incredible sense of humour, and loved all animals. She was very attached to her West Highland Terriers, Sasha and Abby. They were a huge part of her life.
Pat embraced social media and spent hours playing games and doing research on her computer. She was very involved with genealogy as she loved tracing her family's history. Pat was friendly and outgoing. Her passing will be deeply felt by so many people, especially her longtime friend, Debbie Clement.
Thank you to all those who were so supportive during Pat's illness. A special thank you to Dr. Louis Smith for his continued care for Pat over the years.
Due to current Covid restrictions, a celebration of Patricia's life will be held at a later date.
Donations in her honour can be made to the Winnipeg Humane Society, or the Riverview Health Center - Palliative Care.