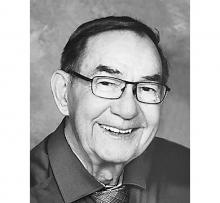 Robert (Bob) Mathew Riddell passed away peacefully, surrounded by family, on January 22, 2021.
He is lovingly remembered by his wife Lorraine, his first wife Mary and his four children, Kim (Russ Zitaruk), Rob (Donna Foote), Janet (Mike Guatto) and Randal (Lisa Macdonald); his grandchildren, Nicolas Zitaruk, Rachel (Carson Zilkey), Sidney (Devan Cobb), Quinne Riddell, Phoebe Riddell, Senem Riddell-Yapici, Hazel and Lewis Riddell, and great-grandson Bohdi Zilkey (Rachel and Carson).
He is survived by his brothers and sisters, Jim, Leonora (Gord Sutherland), Chris (Helen), Brooke and Gordon (Donna); also many wonderful nieces and nephews.
Also survived by Lorraine's extended family the Girouards, Boulets and Sandersons.
Dad was born on the family farm in Warren, MB to Florence (Nickel) and Ernie Riddell and had many rich stories of growing up on the prairies. After attending Manitoba's Teacher's College 1958 he started a lifelong love of teaching even after he retired in 1994.
He moved to Miami in 1963 where he and Mary shared raising their four children on a small farm with so many animals the fences sometimes burst. Many adventures happened all over the countryside including a two week horse and wagon trip to Warren. (Caravan was hand built of course!)
Schools where he taught were Cartwright (1958 to 1961), Milner Ridge, Stockton, Assistant Principal at Miami Elementary and then Principal (relinquished due to health), then Grade 6 and 3 at Miami Elementary. He enjoyed his shift to the Miami and then Skyview Hutterite Colonies. He retired on December 31, 1994.
Robert married Lorraine in 1996 and they enjoyed their retirement in Manitou and then Carman. They travelled visiting the growing number of grandchildren. Dad was famous in Carman for his red electric trike that he delightfully rode around the trails on daily adventures to cap off his retirement.
Many thanks to the tremendously caring staff at the Carman and Boundary Trails Hospitals and Carman Boyne Lodge for the most excellent care Dad received in the last stage of his life. His quality of life was improved everyday by all of you.
Everywhere Dad went his circle of family and friends grew. He will be missed.
In lieu of flowers, donations can be made to Diabetes Canada.