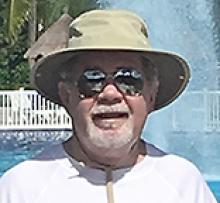 It is with profound sadness that we announce the sudden passing of our beloved father and Gigi, Al Saydak.
He is lovingly remembered by his daughter Megan (Christian), and his son Patrick (Colleen), and four grandchildren, Elliott, Emily, Everett, and Wyatt.
He is predeceased by the love of his life, his wife and best friend, Marion Irene Saydak, who left far too young 21 years ago, but are now happily reunited.
Alan was born on November 3, 1948, in Winnipeg, Manitoba, and was the eldest son of Peter and Dorothy Saydak. He grew up in St. Vital, making many lifelong friendships along the way. Along this journey, he met Marion, fell in love, and got married on July 14, 1973. They then settled in Southdale where they raised their family.
Al's career path included a brief stint with the Province of Manitoba conducting geological surveys. He then embarked on a career that spanned over 30 years in Radiology, forming a multitude of strong friendships that extended past retirement. While working at the Health Sciences Centre, Al became heavily involved in his local Union CUPE 1550, culminating in a successful term as President. Brother Al tirelessly represented the membership with dedication and professionalism.
Al, like Marion, enjoyed many social gatherings. Prior to Marion's passing, they would host numerous parties at their home, often lasting well into the morning hours. They quickly gained the reputation of having an overabundance of good food and drink. Even in retirement, Al kept himself busy with many different crowds including coffee club, the retiree lunches, and high school gang breakfasts.
In his spare time, Al kept busy curling at the St. Vital Curling Club as well as attending both Winnipeg Jets and Blue Bomber games. One of his favourite pastimes was spending time at the family cottage having bonfires, fishing, and drinking wine with his brother Rick. Al would be often found walking the beach dragging home an assortment of driftwood, interesting looking rocks and sea glass.
Al's hobbies included collecting sports cards, stamps, and coins. He also made homemade wine, beer, and spirits. The family bar was always stocked with a wide selection of beverages that would cover a variety of different tastes.
Al's true passion and reason for living was his four grandkids. He showered them with endless love and attention. He was at his happiest when sitting by the family pool watching the grandkids swim, waiting for the moment to fill them up with sugary treats. He never missed a kid's concert, sporting event, or family gathering.
Whether one knew him as the Professor, Teddy Bear, Brother Al, Dad, or Gigi, he provided wisdom, guidance, kindness and acceptance to all.
While he will be greatly missed, he will always be remembered. The next time you find yourself at a social gathering with your favourite beverage in hand, take a moment and raise a glass to remember Al.
Cremation has taken place and a private family service will be held at the Parish of St. Bernadette, followed by an interment at St. Vital Cemetery.