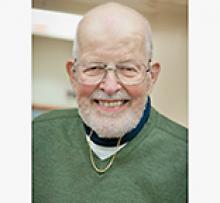 Peacefully on January 26, 2021, Neil passed away at the age of 92.
Neil was born in Winnipeg in 1928 to Ivy and Theodor Almdal. He was the second of five boys. He grew up in Elmwood, attended St. John's High School and spent many rambunctious summers at the family lake near Beaconia, Manitoba, with his four brothers.
In 1945 he met the love of his life, Shirley, and spent the next 76 years building a life and family with her. This January they celebrated their 70th anniversary.
He will be sadly missed and remembered by his loving wife Shirley; children Tim (Donna), Nancy (Al), Sheila and Howard (Mandy); grandchildren Tovah, Ashley (Warren), Brittany (Bobby), Gregg (Kim), Emma, Spencer and Ava; great-grandchildren Blake, Jackson and Declan. He is also survived by his brother Bill (Rose);
sister-in-law Joan; and many nieces and nephews of whom Uncle Neil was a loving and supportive influence on their lives. He was predeceased by his parents;, brothers, Jim, Larry and John; sister-in-law Dorothy; brother-in-law Gerry; niece Heather; nephews Michael Almdal and Michael Mensforth.
In 1957 Neil joined Equitable Life and spent the next 42 years working in and supporting the life insurance profession. He was recognized locally and nationally as a man of integrity and for his pursuit of excellence. One of his most proud achievements was the establishment of the Insurance Council of Manitoba of which he was one of the original signatories and board members. Neil was also a board member of the Canadian Diabetes and the Manitoba Museum.
Family was everything to Neil. He was a loving husband, father, grandfather and
great-grandfather. Being involved in the lives of his children and grandchildren brought him immense joy.
The family would like to thank all the caring staff at the Simkin Centre for their loving, kind and compassionate care of Dad and for the unwavering support of our family.
Neil was a kind and gentle man and will be missed by all who knew him. Dad, go in peace. We miss you. You will always be with us.
In lieu of flowers, a donation may be made Siloam Mission, Simkin Centre or to a charity of your choice.
Due to COVID-19, a celebration of a life well lived will be held at a future date.