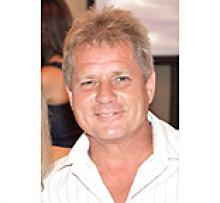 It is with completely broken hearts that the family of Kevin Charles Dawson announces his peaceful passing, at home, on January 30, 2021, at 4:15 a.m. after a very heroic battle with cancer.
Kevin was predeceased by his dad Rene Joseph Dawson, his mom Patricia Pauline Dawson, and father-in-law Rudolph Boyko. He leaves to mourn his wife Brenda, of 37 years, and his daughters, Denée (Curtis) and Danika (Tom), as well as his three cats, Chester, Lucky and Spooky Girl. He will be lovingly remembered by his mother-in-law Margaret Boyko, as well as many aunts, uncles, cousins, and other relatives.
Kevin was born on October 31, 1959 in St. Boniface General Hospital. He attended Maple Leaf School on McIvor Avenue until 1968 when the family moved to Tyndall, and then he attended Garson Elementary, Tyndall Elementary, and Edward Schreyer School. He started working with Manitoba Hydro in August of 1978 until August of 1989 when he began employment with Winnipeg Hydro. In 2002, Manitoba Hydro purchased Winnipeg Hydro and he was once again back working for Manitoba Hydro. Throughout his career, Kevin lived and worked in many northern communities, and as a result, he made a number of close friends, whom he thought of as extended families. In 2016, he finished off his working career in Pointe Du Bois, Manitoba. Kevin had many interests, which included: high-performance cars, trains, airplanes, model railroad paraphernalia, and music-especially singing and playing guitar. He enjoyed going up-river with the PDB boys for fishing trips. Kevin jokingly agreed with his good buddy Rod that life was all about, "booze, chicks, and things that burn gas." Once he retired, him and Brenda started vacationing. His favourite places were Golden Parnassus in Cancun, Mexico and road trips to Arizona and California. Kevin also made numerous trips to see his good friend Trevor Astrope, a friend who he greatly admired, over hot star chicken and walking the streets of Montreal while talking about guitars and music. Kevin also liked attending the Goldeyes games and they became members of the James Gang Family in 2016.
Kevin couldn't be prouder of his biggest treasures and accomplishments, his two daughters, Denée and Danika, and his wife, Brenda.
Honorary Pallbearers are Steven Sippel, Devon Orvis, Ward Foster, Bruce Scott, Howard Chercoe, Robert Chercoe, Trevor Astrope and Tom Wegier.
He would like to thank special friends who were always there for him: Sage Keown, Danny Cure, Brian Balderstone, Calvin and Georgia Hirst, Tom, Lana, Lenny, and Levi Wegier, Brian Gould, Drake Miller, Rick Penner, Rod Melnick, Bobby Kazina, Gerry Artimowich, Darcy Aimes, Gary Schwindt, Wendy and Glen Kostiuk and all of the other gang at the Boxing Day parties, and the many other characters from Pointe Du Bois.
Kevin greatly appreciated the calls, texts, and of course the visits from friends and family throughout the past year. The family would like to thank family Dr. Arvind Hastir, CancerCare Doctors: Dr. Paul, Dr. Demsas, Dr. Lindenschmidt, thoracic surgeon: Dr. Kidane, all nurses at Selkirk CancerCare and the palliative care team: Dr. Clark, Laura Klammer, and nurses and home care aides. Words cannot express the gratitude and appreciation that the family has for Lana Romano, our earth angel, who helped make Kevin's last weeks as comfortable as possible.
For all those who knew Kevin, this will make sense; the weather was -5ºC, with a 16 km/h south-east wind. The sun rose at 8:03 a.m. and set at 5:17 p.m. The moon was in the waning gibbous phase.
In lieu of flowers, donations can be made to a charity of your choice.

We love you Dad,
and you will live on in our hearts forever.