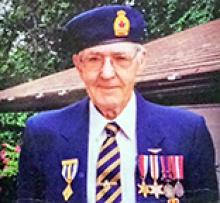 Dad died peacefully in his sleep at the Personal Care Home in Arborg, Manitoba.
He received exceptional care both there and at the House of Hope where he previously lived.
Dad was recently predeceased by his second wife Kay on November 22, 2020.
Dad enlisted in the R.C.A.F. when he was 20 years old. He trained as a mid-upper gunner and was part of the 428 Ghost Squadron, where he flew 32 missions over France and Germany. After the war, Dad worked for Manitoba Hydro for nearly 43 years, mostly in Riverton and Arborg. In 1948 Dad married Leona McKenzie and they had two children (Noreen and Ken); sadly, Leona passed away in 1982 due to cancer. Ken passed away suddenly in 2012.
Dad is survived by his daughter Noreen (Keith) Tomasson of West Kelowna; grandchildren, Kelly (Sarah) Tomasson of Calgary and Nicole (Matt) Huff of West Kelowna; great-grandchildren, Brett, Sydney, Dylan Huff and Jordis Tomasson.
Dad was very proud of his wartime service and attended every Remembrance Day service in both Arborg and Riverton.
Donations to honour Dad can be made to the Arborg Legion.