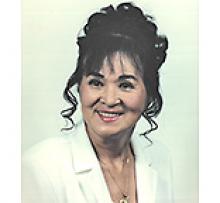 On Sunday, January 31, 2021, Terumi "Teri" Hamade peacefully passed away at the age of 82.
She is survived by her sister Brenda Michiyo Moberg (Earl), brother-in-law Denis Hamelin, son Toshihiro Jason (Sandi), grandchildren, Tokashi Alex, Mariko Kiralouise and Hiroshi Jacob, as well as many nieces, nephews and cousins. She was predeceased by her father Risuke, her mother Tomeno, brother Harry Hirokazu (Chiyoko), and sister Jessie Fujimi Hamelin.
She was born in Port Alberni, BC and lived in Ucluelet until 1942. She and her family joined other Japanese-Canadians interned in Hastings Park and Lemon Creek during the Second World War.
After the war, Teri and her family moved to Winnipeg where she found success working as an accountant for businesses such as Rusco Windows, Checkerboard Realty, Inter City Gas, and Fred Douglas Lodge. Following retirement, she kept up with a number of side jobs including Canadian Motorcycle Sales, Tom Town Realty, Magnus Daycare, Pet Valu, PowerRich and many others.
Teri was a woman ahead of her time, a single mother who worked hard to raise her son and care for her parents. She carved her own path in life, and made friendships that lasted lifetimes. In her later life, she enjoyed helping to raise her grandchildren, who will always cherish memories of spending weekend afternoons with her. She was always ready to help them, whether it be driving, supporting their education, or offering words of wisdom.
An avid sports fan, she rarely missed watching a game and rooted for local teams. She enjoyed travelling with her mother, and visited Japan twice to reconnect with relatives. Some of her hobbies included knitting, hosting family gatherings, and going to the casino. She enjoyed socializing with friends and talked daily with best friends Linda and Marion.
Teri was blessed with wonderful neighbours who went above and beyond, including Cheryl and Bill, who along with WRHA home care staff, helped her live at home in her later years.
Cremation has taken place, and a celebration of her life will be held at a later date.
In lieu of flowers, donations can be made to the Heart and Stroke Foundation, CancerCare Manitoba, or another charity of your choice.