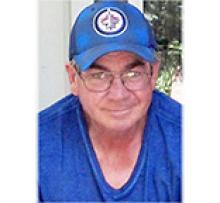 Kimberly Roland (Zeke) Secord passed away on February 1, 2021, with his wife Susie and sister Marilyn by his side.
Zeke was born in Dauphin, MB, on December 29, 1957, to Freda and Roland Secord. He was one of six children and spent his entire life in Dauphin.
Zeke spent most of his adult life working for the Department of Highways. He took great pride in his work. He would be out the door at four in the morning after a big storm to make sure the roads were clear so people could get to work safely. When he retired, he worked part time for Cooley Motors as the shuttle driver and enjoyed the conversations he had with his many customers.
His work life was a small part of who he was. He was a son who loved his parents, enjoying a close bond with his father Rollie until he passed. He was a brother who enjoyed the company of his siblings and extended family over a game of cards or golf. He was a stepfather to three boys. He was so proud of each of them and who they had become. He was Grandpa to ten beautiful children that he loved dearly. He looked forward to summer visits, getting the "Barbie Car" ready for the girls and the mini jeep for the boys, setting up the "Wally World" pool and floating around or watching the kids swim and spending time with the kids in the backyard or keeping an eye on them while they drove that car up and down the sidewalk. Mostly he was a husband and best friend to Susie. Long country drives in the Jeep, camping on the shores of Dauphin Lake, taking our dog Misty and the kids fishing for minnows, slow dances by the fire and pretending to love Jazz because I did. Hunting for the perfect Christmas tree, surprising me with a decorated tree in the backyard because I said I wished I had a spruce in the yard I could decorate. Making the outdoor display bigger each year. Humouring my need to change my flower beds on occasion and shoveling dirt to create new beds and never worrying about how much the flowers cost. Supporting my time spent away from home volunteering, telling me he was proud of me. Floating in the "Wally World "pool on lazy summer days. An evening on the deck watching the flowers grow and telling each other what a good job we had done. Rarely a day went by that the words I love you were not said. Despite the bumps along the road and some things we both wish could have been different, I could not have asked for someone better to share my life or to make me feel more loved. In the end it is not important where you lived or what you did, it is how you loved and were loved.
Waiting for Zeke were his parents, Freda and Rollie; his mother-in-law Lorna Christianson; brother-in-law Bob Crowe; and sister-in-law Shawna Secord.
Leaving to mourn his passing are his wife and partner of 35 years, Susie Secord; his siblings, Marilyn Crowe, Kelly (Heather) Secord, Wanda (Owen) Connolly, Susan (Ed) MacQuarrie and Kirk Secord; his stepsons, Derek (Janalee), Curtis and Joey (Tara) Christianson; his sisters-in-law, Laurie Christianson, Anita (Don) Jacques and Louise Banks; and his ten grandchildren: Hailey, Rebecca, Mikalea, Elizabeth, Chelsea, Eric, Daniel, Sly, Ezra (Ezzie) and Odin (Odie).
A special thank you to family and friends during this time, especially Zeke's sister Marilyn who was there during the worst of times.
If friends and family wish to remember him, please donate to the Hot Lunch Program at the Dauphin Friendship Centre.

Unforgettable is what you are………