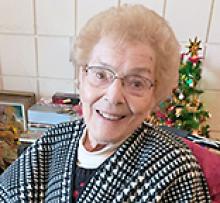 Ruby Joyce, who began a 43-year career teaching career in a tiny, one-room schoolhouse and ended it as a city principal, died February 3, 2021, after 104 remarkable years during which she met two global pandemics, two world wars and the Great Depression with grace, faith, good humour and unbreakable spirit.
Ruby was born in a farmhouse outside Paynesville, Minn., on July 30, 1916. In 1922, her family were persuaded by relatives to homestead near Taber, AB, where land was plentiful and the climate was fine. But after six years of drought, the family moved again to Warren, MB. There, Ruby attended Warren Consolidated School and later completed high school in Stonewall.
During the Great Depression, money was too tight for Ruby to attend university immediately, but her father sold some cattle so she could attend Winnipeg Normal School and get new glasses. A one-year course allowed Ruby to teach anywhere in Manitoba up to Grade nine, but jobs were scarce, especially for new teachers with no experience.
Thanks to a family acquaintance, Ruby got a meeting with a senior education official at the Manitoba Legislature, who told her, from behind his huge mahogany desk, that he had a waiting list of 500 teachers and "they ought to lock the Normal School door and throw away the key." After a few minutes of paper shuffling, he offered her a job at a school in boggy country, 10 miles from one town and 18 from another, where she'd live in a tiny two-room cottage on the school grounds. That was how, at age 19, Ruby took her first teaching job at Rocklands School.
She taught for six years in one-room rural schools then moved to graded schools, teaching in Lilyfield, Stonewall, Swan River, Cartwright and La Riviere.
At Cartwright, she met Claude Joyce, a fellow teacher, and they were married in 1957. She and Claude lived and taught in Flin Flon for many years, with Ruby acting as teaching principal at Birchview Elementary School, and later teaching grades one to six at Willowvale School.
After many years in Flin Flon, where Ruby and Claude had wonderful friends and indulged their love of square dancing, they moved to Winnipeg in 1961, and built their riverfront dream home along the Red River on Henderson Highway, where she lived for more than 50 years.
Ruby taught high school math at Garden City (where her students included the Bachman boys - she recalls Randy as a great student), before becoming a teacher, vice-principal and guidance councillor at Edmund Partridge Junior High. She loved the teaching, but said she cared less for trying to keep teenaged girls on the straight and narrow.
She went on to become principal at Centennial Elementary School, before ending her teaching career in 1978 at Elwick School.
After retiring, she wondered how she ever had time to go to work, keeping herself busy by caring for Claude and her mother, and tending to the award-winning garden she and Claude nurtured at their home for decades.
Ruby went on to live at River Ridge, Maples Personal Care Home and Kildonan Personal Care Home, where she made friends with her caring disposition and kindness.
Ruby, who maintained her keen intellect and gentle good nature until her final days, will be fondly remembered by the thousands of students whose lives she touched, her community at Albright Church, her many friends and her family, who will remember her generosity, her boundless capacity for love and her unsinkable energy.
Ruby was predeceased by her parents, Herman and Olga Arndt, her husband Claude, her sister Lucile Palas, her stepdaughter Beverley Joyce, and sons-in-law, George Schmidt and Alvin Gervais.
She is survived by her stepdaughter Claudia Schmidt, and four grandsons, Christopher, Eric, Jonathon (a.k.a. Joff) (Mary Agnes Welch), and David Schmidt. Ruby is also survived by one great-granddaughter and two nieces.
The family would like to extend special thanks to Ruby's many friends, caregivers and companions who helped care for her in her final years, particularly Donna Buhay, Dale Dimaapi and Sheila Reid.
Details on a memorial service will be announced at a later date.
In lieu of flowers, donations may be made to Albright Church or a charity of your choice.