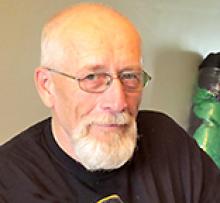 Alvin Merle Day passed peacefully on February 5, 2021 with his loving wife Wandis by his side, after a lengthy battle with cancer.
Always in the hearts of his children, Daniel (Lisa), Curtis and Sabrina (John); his grandchildren, Dradon (Kathleen), Lateesha, Owen, Juliette, Brielle; and his in-laws, Ray and Elaine Dowsett. He will be missed by his sisters, Gloria (Larry), Gwenyth (Terry), Eleanor (Jerry), Cheryl (Ron); along with many nieces and nephews. He is predeceased by his parents, Russell and Lenore Day.
Merle had a significant career with Manitoba Hydro with over 40 years of service, and was very active in his community. A proud member of the Chamber of Commerce, Board of Directors for the Eriksdale Credit Union for 14 years, and 12 years with the Town Council including serving as Deputy Reeve. His involvement in town projects such as the McEwen Park development, Playground Committee, building of the Wellness Centre, and upgrades to the cemetery are all examples of how much his community meant to him. Further to these achievements, he was actively involved in the volunteer fire department, coaching hockey, as well as an Instructor in the 4-H program.
His passion for creating beautiful things was shown in his hobbies. He was known for his craftsmanship in various woodworking projects, having sold purple martin houses all around the province. Having built the family's home in Eriksdale, he gathered invaluable building knowledge. He would often offer his insight and years of experience to his children and their renovations or projects. His quick wit, and sometimes dry humour, would often sprinkle his words of wisdom, often times seeing straight through to the solution of a problem, pointing it out with a simple question of "Why don't you do it this way?!".
He had an eye for things that sparkled. This was obvious when he married Wandis in 1972, but also reflected in his passion for cars and motorcycles throughout his life. At 16 years old, with freshly polished chrome, he rode his motorcycle to BC with friends. Later in life he and Wandis cruised the open highway on his beloved Harley Davidson. His children would hear stories of a rare 1971 Shelby Cobra, usually followed with the question "Why did you get rid of it?", only ever receiving a kind smile in response. Merle had an interest in photography and was always seen with a camera around his neck or a video camera on his shoulder at family functions. He valued family and wanted to capture and cherish every moment with them.
The family would like to thank the staff of E.M. Crowe Memorial Hospital in Eriksdale, CancerCare in Gimli, and Dr. Gingerich at CancerCare Manitoba.
In lieu of flowers, donations to the E.M. Crowe Memorial Hospital Guild, c/o Irene Sigurdson, Box 474, Eriksdale, MB R0C 0W0 would be graciously accepted.


Merle passed away quietly, with his loving wife Wandis by his side, on February 5, 2021, at the E.M. Crowe Memorial Hospital in Eriksdale, MB after a valiant battle with cancer.
In keeping with his wishes cremation has taken place and a service will be held at a later date.
In lieu of flowers, donations may be made in Merle's memory to the E.M. Crowe Memorial Hospital Guild, c/o Irene Sigurdson, Box 474, Eriksdale, MB R0C 0W0
Longer obituary to follow.