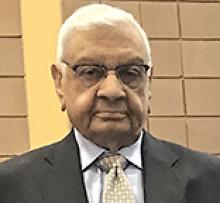 Peacefully, at home in Winnipeg, on February 3, 2021, aged 87 years.
Rais was born third of six siblings in Lucknow, India. His family eventually settled in Karachi, Pakistan when he was a teenager. Rais received a BA Honours in Economics and MA in International Relations from The University of Dhaka, an MA and PhD in Political Science from the University of Michigan, and many academic awards including a prestigious Fulbright Scholarship. In 1967 Rais accepted a professorial position in the Political Science department at the University of Winnipeg where he went on to enjoy a distinguished 43 year career. He proudly received his Canadian citizenship in 1973. While at the University of Winnipeg he chaired the Political Science department for many years, sat on both the Senate and the Board of Regents, and represented faculty negotiating committees for several collective bargaining agreements. In 2010 the university awarded him Fellowship in United College in recognition of his contributions.
Outside of his academic endeavors, Rais was an active and devoted member of the Rotary Club of Winnipeg who served as its President, and worked with their Model United Nations program for over 30 years. In retirement Rais took great enjoyment in spending time with his granddaughter Ayva.
Rais is survived by his two sons, Omar and Adam, granddaughter Ayva, daughter-in-law Heather; sisters, Sumbul and Sanober, brother Shakil, and many beloved nieces and nephews.
A private family service will be held. Due to COVID-19, a Celebration of Life will be held at a future date.
In lieu of flowers, Rais has requested that donations in his name be made to the Rotary Club of Winnipeg's Permanent Endowment Fund or the University of Winnipeg Retirees Association Bursary and Scholarship Fund.