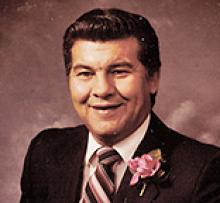 Born in the community of Ste. Madelaine, dedicated father, grandfather, great-grandfather, uncle, brother, friend and leader, George peacefully left this world on Friday, February 5, 2021, to join his loving wife Edith and their son George.
George passed away with his son John at his bedside in the St. Boniface Hospital. Born on March 12, 1935, George lived a very joyful life filled with many challenges, tragedies, successes and honours. George loved to spend time talking with people and with his crooked little grin enjoyed a bit of the unexpected in and from people.
George was one of the founders of the Manitoba Metis Federation and served as the first Vice-President of the Southwest Region elected in 1968. The MMF Southwest Region Board of Directors worked out of Minnedosa for three years, then in 1971 George opened the first MMF office in Brandon. George continued to serve on the MMF Board of Directors until 1979. His commitment to the Metis people and the work of the Metis Nation never wavered and he was blessed to serve as the Metis Elder for the MMF and the Metis National Council until his passing.
A well respected Elder, not only in the Metis community, George was active on many committees and Boards. A fluent speaker and strong advocate for the revitalization, preservation and teaching of the Michif Language, George was a long-time member of the MMF Michif Language Committee, the Indigenous Languages of Manitoba Board and the Manitoba Aboriginal Languages Strategy Board.
Since his retirement from the Addictions Foundation of Manitoba, George dedicated himself to his music, singing and playing his guitar and reviving the old Michif songs that he had learned from his mother.
George has the distinguished honour of: being inducted into the Order of the Metis Nation in 2019; receiving the Manitoba Council on Aging - Murray and Muriel Smith Award in 2017; honoured as Metis Grandfather by Kani Kanichihk - Keeping the Fires Burning Award in 2015, as well as other awards and gifts over the years.
Of all his achievements, George's greatest honour was being DAD, Grampa, Great-Grampa and Uncle to his very large family which extended and included his many friends over the years. "Family is the greatest gift" he would say. Those who had the privilege to know him well will forever feel his presence.
George has left this earth, but his children will forever celebrate him and their mother in the strength of the family they raised. George is survived by his children: Rose Leaming, Georgina (Rick) Liberty, John (Barbara) Fleury, Mona (Roger) Smith, Noela Fleury, Keith (Elizabeth) Fleury, Iris (Alex) DeMontigny, Darcy (Carolina) Fleury, Connie (Glen) Reimer, Bernadette (Harry) Reveille, and Brenda (Ernie) McBane; as well as his 28 grandchildren with 21 spouses and 43 great-grandchildren, as well as numerous nieces and nephews.
George was predeceased by his mother Anne (nee Ledoux) and Jean Edouard Fleury, brothers: William, Frank, Ralph, Alex, John (Toy), Phillippe, Paul, and sisters: Eleanor, Elizabeth and Pauline, as well as his wife Edith's family members and grandson Adam Nadem.
A private family Funeral Mass will be held in St. Alphonsus Roman Catholic Church, Minnedosa, MB with interment following in the Minnedosa Cemetery.
Pallbearers: Jason Liberty, Jordan Fleury, Jotarro Fleury, Keith Smith, Keith (JR) Fleury, Alex DeMontigny, Mitchell Reimer
If friends so desire, memorial donations may be made to the Minnedosa Food Bank.
The family wish to express their heartfelt thanks to all the doctors, nurses and staff that looked after George at the St. Boniface Hospital Floor 4E and also to Dr. Lockman.
Following the Funeral Mass a video of the service will be available to watch at www.whitesfh.ca