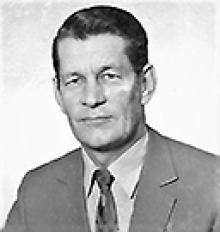 Glenn was born in Erickson, MB and lived in and around that area until his family moved to Winnipeg where they settled in the West End of the city. Glenn was the last of the family of Anton and Anne Christianson.
He was predeceased by his parents, sisters, Mae, Lorraine and baby Aldine, as well as brothers, Earl, Elgin, Lorne and Wayne, and by his beloved son Ward. He leaves to cherish his memory his wife of 62 years, Joan (nee Stevens), sons, Tod (Anne) and Guy, his grandsons, Adam and Steven, sister-in-law Marilyn Christianson, brother-in-law James Stevens, and numerous nieces and nephews.
Glenn attended Isaac Brock and Daniel McIntyre schools before becoming a machinist. He used his technical training to develop a successful career in sales and management for industrial tools.
Glenn was very involved in sports and was a star lacrosse player in his youth. Later he became a well-respected curler and over the years he was a member of the Valour Road, Charleswood and Deer Lodge Curling Clubs. In his retirement years he became a good golfer spending many enjoyable hours at the Teulon Golf Club with his brother Earl and friend Harold Wheadon. In later years Glenn would enjoy coffee with the old boys at Burger King followed by a stroll around Wal-Mart.
He enjoyed the outdoors, hunting in the fall and spending summers in the sun at the beach. He loved the time he and Joan spent at their summer place near West Hawk Lake.
As per Glenn's request there will be no memorial service. Cremation has taken place