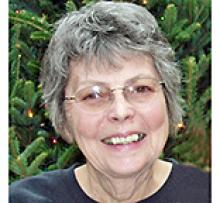 Loretta Joan (Walker) Schultz, 82, of Winnipeg, died Monday, February 8, 2021.
Born on Wednesday, February 1, 1939, in Winnipeg, MB, Canada, she was the daughter of the late James Henry Walker formerly of Winnipeg, and the late Freda Amelia (Farley) formerly of Victoria, BC, Canada.
Joan retired in 1992 after 22 years with RBC as a Telemarketing Manager.
She is survived by her husband of 63 years, Gary John Schultz, son of the late Roy Jack Schultz and the late Dorothy Irene (Jones) formerly of Winnipeg, MB.
Loretta Joan is survived by two sons, Larry Brent (Alanna) of Gillam, MB, and Jeffery Scott (Mary) of Winnipeg; one sister Beverly Drummond of Regina, SK; three grandchildren, Ryan James, Mark Adam and Elaine Sarah of Winnipeg, MB.
Loretta Joan was preceded in death by six siblings, Freda Amelia (Margaret) Walker of Detroit, Michigan, Dorothy (Walker) Groves of Lethbridge, AB, Hazel (Walker) Licata of Fort Lauderdale, FL, USA, James (Jim) Walker of Winnipeg, MB, Norman David Walker of Sun Lakes, AZ, and Margaret Thelma (Betty) of Victoria, BC.
According to her wishes, cremation has taken place and a private family service will take place at Brookside Cemetery at a future date.