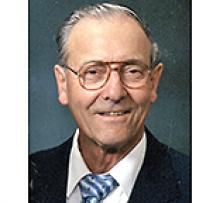 John Robert "Bob" Baergen, 86, of Winnipeg, Manitoba, passed from this earth to his heavenly home on Saturday, February 6, 2021 at Grace Hospital, following complications from diabetes.
Bob was born in Irma, Alberta in 1934 to the late Gerhard and Maria Baergen. Along with his parents, Bob is predeceased by his son Rob; his granddaughter Shelby and his brothers, Ernest and William.
Bob was blessed with a large and loving family and is survived by his wife Betty; his son Don (Deborah); his daughters, Darlene, Beverly (Tim) and Kerri (Brian); his daughter-in-law Portia; 14 grandchildren and 14 great- grandchildren; his sister Lily Krause (Carl); and several nieces and nephews.
There will be a private family gathering at a later date to honour Bob's life.
Jesus said to her, "I am the resurrection and the life, he who believes in Me will live even if he dies, and everyone who lives and believes in Me will never die." John 11: 25-26
Thank you to the staff at Grace Hospital for their kind care and to Rock Fontaine for his work on the funeral arrangements.