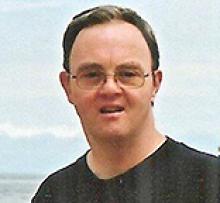 It is with deep sorrow and much love that we mourn the passing of Cameron Lauder at the age of 59.
Cameron was predeceased by his parents, John and Dorothy Lauder and his brother David Lauder.
He will be lovingly remembered by his sisters, Marilyn (Jack) Mitchell, Diane (Mark) Soltys and his brother Jack Lauder; nephews and niece, Danny (Chastine) Mitchell, Keith (Elena) Mitchell, Brad (Ashley ) Mitchell, Graham Lauder and Beck Lauder; great-nephew and great-nieces, Kieran, Taya, Alicia, Breanne and Scarlett and numerous cousins, aunts and uncles.
He will be deeply missed by his best friend Jim Leronowich, his roommates, Robert, Carol, Anne and all the support staff at Winnserv and SCE Lifeworks to whom the family is forever grateful.
Despite the many challenges Cam faced, his life was full and joyful. From an early age he led a very active life. He became involved with Special Olympics Manitoba, first with track and field, floor hockey and eventually joining cross country skiing and swimming. Cam soon discovered that swimming was his passion. He competed nationally and internationally and his talent in the pool took him to the World Games in Louisiana and his skiing took him to the National Winter Games in Saskatoon. Cameron was the inaugural athlete inducted into the Special Olympics Heroes Hall of Fame and over the years he earned numerous Sportsmanship Awards.
Cam had several jobs of which he was extremely proud, making many friends along the way. He was able to live independently for most of his adult life and formed a lifelong friendship with his roommate Jim.
Cam's greatest joy was being with family. He spent his summers at the cottage and loved the lake. Cam loved to celebrate with family and had a toast for every occasion.
Cameron will be remembered as a kind, gentle soul who touched so many with so few words.
There will be a celebration of Cameron's life at a time when we can all gather.
Memorial donations in Cameron's name may be made to Winnserv Inc. Or Special Olympics Manitoba.