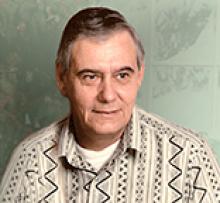 On February 11, 2021, Ed was called home to meet his Lord, Saviour.
He was predeceased by mother Adele in 2001, father Earl in 1981, friend Omar in 1992, brother-in-law Kenny in 1987, sister Rita in 2008, brother-in-law Don in 2009, nephew Tom in 1991, great-nephew Miles in 2005 and sister Marlene in 2020.
His memory will be cherished by his two daughters, Kaitlynne and Michelle. He will be missed by his siblings, Marie (Carl), Lena, Alma (Bill), Raymond (Bonnie), Audrey (Darnell) and Rollie (Deb); all his numerous nieces and nephews and their families; as well as his mother-in-law Joan Watson, and friend and former wife Lois.
Ed was a truck driver by trade, working for Penners, Arnold Brothers, Christie Transport, and Wiebe Trucking. He made many friends in his working career. Ed loved to golf, sing and play music as well. Ed had a strong faith in God and he walked with God everyday. He leaves all his friends at the Kiwanis Courts on Point Road in Winnipeg, who were saddened to hear of his death.
Thank you to all his church family, and to the Pastor Randy Leavitt for all the spiritual guidance throughout the years.

God's garden must be beautiful,
He only takes the best.
Rest In Peace Ed, until we meet again.