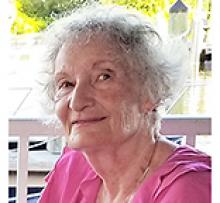 Karen Le Goff (nee Perlmutter), aged 79, passed away unexpectedly at her home in the Wolseley area of Winnipeg on the morning of February 17, 2021; a shock to her family and friends as she retained such a lifeforce.
Karen showed wisdom and mettle from an early age and did not waste much time growing up and getting out to see the world. Born in Winnipeg in September 1941, she attended local west end Winnipeg schools before falling in love, getting married to Robert Le Goff, then an active serviceman in the RCAF, and having her first child before she was 20. She had two more sons in the next three years whilst travelling with the family from Winnipeg to Gimli and then to Belleville before moving to Germany in 1966. The family eventually did return to Manitoba in 1969 and following a brief stint of living in the local rural community of Elie, Manitoba, Karen and Robert were divorced in 1979. Karen subsequently returned to Winnipeg in what was to become her most natural setting, Wolseley.
Karen attended college in Winnipeg and enjoyed working for local businesses doing book-keeping and business accounting. She was very resourceful always well turned out and stylish on a budget. She made the best of what she had and of her situation. She found time to engage in her political activities demonstrating her strong sense of social justice that she inherited from her father. She was an avid and active member of the NDP. Most memorably, as part of the anti-free trade agreement movement, she was one of those attending the "throw baloney at Mulroney" event. She had a terrible arm and so no harm done.
Throughout her almost 80 years, Karen expressed her love of the creative arts and pursued art projects that included all kinds of paintings, drawings, stained glass, batik, sewing, knitting and interior design. In support of the local art scene, Karen volunteered to accommodate guests during the Fringe Festival, and was a regular at the Winnipeg Folk Festival, the Royal Winnipeg Ballet, the Manitoba Theatre Centre, the WAG, Music 'N' Mavens at the Rady Centre, and arts and music at the West End Cultural Centre. She had also been spending part of every summer at the family cottage in Gimli since she was a child. For her three boys, she was "our hippy mom" free spirited and providing them with a sense of freedom to pursue their own lives.
Since retiring, Karen was well known as the "hub" for a dizzying social schedule which included the above activities as well as weekly aquatics classes at the Sherbrook Pool, taking and teaching art classes, volunteering at the reception desk of the Royal Winnipeg Ballet, hanging out at the Forks, giving blood (she was type O), and attending regular lunches with friends and family and the monthly "cousins" events. Her warm and tasteful home was a favourite setting for many traditional get-togethers when she welcomed and accommodated everyone - even the youngest who were known to use her staircase as a tobogganing run. Friday evenings, however, were reserved for her volleyball group - a special set of friends she had bonded with for over 30 years.
Being the eldest of four, Karen had a particularly strong and affectionate relationship with her mother and father, Jack and Betty Perlmutter, who in turn had the greatest influence in her life. Her three sons, Michael, Daniel and William, heartbroken with her sudden passing, were the beneficiaries of this influence, having been raised by a loving, supportive and forgiving mother.
Karen was especially close to her siblings, Bill Perlmutter and his wife Kris and their children, David, Signy and Sara, as well as Mary Perlmutter and her children, Brian, Steph and Kevin and Ruth McLean (deceased) and her remaining son Norman. For this entire group she was Auntie Karen known for her artistic influences, eccentric desserts and the sense of fun at the cousins' events.
Her special relationship was with her grandchildren; and to them all known as Amma. Jack, Mischa, Hannah, Noah, Rafaela and George all have a very special place in their hearts for their Amma - full of great memories to own and to share. Throughout this pandemic she stayed in touch personally and/or through video chats with each of them. Yelling "Amma is here" or "Amma is on line" would bring smiles and a scurry of activity.
Karen was opinionated, independent and strong willed, but with a heart full of love and warmth. She is dearly missed by her large extended group of family and friends who have grown to know and love her over a lifetime.
A private visitation will be held on Wednesday afternoon, February 24 at Bardal Funeral Home and Crematorium with restricted viewing due to the ongoing pandemic. An interment ceremony will be held separately at a later date. Please do get in touch with the family to know more on dates and location.
As an expression of sympathy, memorial donations may be made to the Canadian Red Cross.