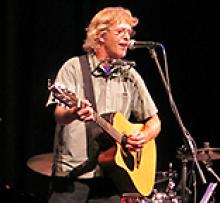 Tom "Sim" Dunlop, age 70, passed away February 13, 2021 after a brief illness with lung and bone cancer.
Tom was born in Toronto. During his school years, he was known as Sim, but he shed that nickname when he left school. He spent 16 years in Deep River, Ontario, where he excelled at hockey, and began his lifelong love of playing the guitar at the age of 14. In 1967, he and his family moved to Pinawa, Manitoba. By then Tom was an accomplished left-handed rock and roll guitarist. Shortly after his arrival in Pinawa, he joined Pinawa's first teen high school 60s rock band called The Fender Benders, which had formed in the summer of 1965-1966. The band's equipment was cobbled together from the likes of the Eaton's catalogue, pawnshops and a self- assembly electronics outfit called Heathkit. Tom was the lead guitarist and often the lead singer, and led the band until the band members scattered from Pinawa in 1969-1970. The Fender Benders were without a doubt Tom's extended family. He called each one of these guys his brothers - Griffy (Gary Griffith), Turgy (Del Dunford), J.P. (John Putnam), Hammm (John Hammond), and Rym (Gerry Reimer).
Tom lived all his adult years in the Winnipeg area pursuing a career in music, and was well respected in the music community. He played in local rock bands throughout his career starting out with The Fender Benders, and including The BJ5, The Strollers, The Homegrown Band, The Other Brothers, Reckless, Pit Boss, and in a Duo with lifelong friend, Danny Kramer. Tom also had the opportunity to open up for such bands as Streetheart and Nazareth.
Tom also played on his own in coffee houses, bars, at weddings, and at the Riverview Care Home, where he enjoyed entertaining and visiting with the seniors. He worked for many years at music retailer Long and McQuade, where he was top salesman for guitars. In addition to his guitar playing, he wrote many songs, some of which were based on his personal experiences in the music industry in Winnipeg. He also could be regularly found busking at The Forks in downtown Winnipeg. One of the things he enjoyed most about busking at The Forks was talking to the kids. They would ask him questions about his guitar and songs. He loved that. He enjoyed biking, and rode his bike to The Forks every day, guitar strapped across his back. He covered many a mile in the city on his bike.
In recent years, he devoted much of his time to looking after his mother, who passed away a few years ago at the age of 96. He was a loving caregiver, and had such a soft heart for her. The nurses that came into their home, as well as in the hospital, commented often how Tom showed such patience and love to his mom.
In 2010, after a 41-year break, The Fender Benders reunited, and over the course of 10 years got together almost every year and played four live performances, beginning with their alma mater at the Pinawa High School Reunion 2013. Tom was the undisputed leader of the band and without him this reunion of the high school rock band would never have been possible. Some old pals get together each year to fish, hunt or golf, but getting together to play 60s rock music with his old high school friends meant the world to Tom. These friends were a support to Tom during his illness until his final days - visiting, phoning, emailing, texting and checking in regularly.
Tom was one of those guys who's "bark was worse than his bite". Deep down he was a compassionate, caring, down-to-earth guy, who lived a life unconcerned with amassing material wealth. He was not embarrassed to shed a tear, or say he loved you. His family, friends, and his love for music were all that mattered - and it all started when Tom saw the Beatles on Ed Sullivan, and Paul McCartney was a left-handed guitar player.
Tom and his brother, Dwight, never missed a Saturday where they did not visit on the phone. Every Saturday, first thing in the morning they would check in with each other and discuss the week, politics and life issues.
Tom was preceded in death by his parents, Thomas and Phyllis; and by his twin sister Margo. He is survived by his younger brother Dwight, Dwight's wife Bev; nieces, Kielly and Karla (Lance); and a great-niece Paige. Tom's love for music, writing music and guitars has been passed on to his nieces, Kielly and Paige. While he will be greatly missed by family and friends, thankfully his music lives on via YouTube and Facebook.
Thank you to everyone for the flowers, phone calls, cards, emails and texts expressing their love for Tom. Thank you to the doctors, nurses and staff at the Victoria, Health Sciences Centre and St. Boniface Hospitals. Tom was always so appreciative for the way he was cared for.
With the uncertainty of the pandemic, a memorial or celebration of his life will likely be held post-pandemic.
Donations in memory of Tom may be made to the CancerCare Manitoba Foundation.