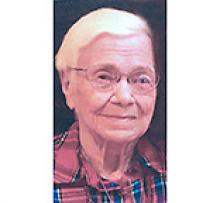 It is with great sadness that on Sunday, February 21, 2021, Kat (Katrina) passed away at the age of 97 at the Oakview Nursing Home in Winnipeg, Manitoba.
Kay is survived by her son Kenneth and grandson Kristopher, daughter Gloria (Murray) and son Larry (Virginnia) and grandson Matthew and many nieces and nephews. She was predeceased by her husband Lloyd, father Anton Drul, mother Nellie Drul, brother Dick Drul, sister Anne Ewashko, brother-in-law Myrcel Ewashko and daughter-in-law Arlene Koytk.
Kay was born on July 27, 1923 on a farm near Menzie, Manitoba, daughter of Anton and Nellie Drul (nee Mackedenski). She later lived and grew up on a farm near Oakburn, Manitoba until she married Lloyd Kotyk in 1946. After their marriage, Lloyd and Kay bought a farm in the Menzie, Manitoba area and farmed there until 1959 at which time they decided to move to Winnipeg and resided on Parkview Street, sunny St. James. There, they resided for 50 years and upon their golden years they moved to Sturgeon Creek Retirement Centre and assisted living.
Kay was a devoted wife and mother who was known for her excellent cooking, hard work and the love to host and entertain family and friends. She enjoyed spending time at the cabin at Clear Lake and in her later years enjoyed travelling across Canada, through the United States, especially Las Vegas and even to Mexico. Kay along with her husband Lloyd were cofounders and lifetime members of St. Basil's Ukrainian Catholic Church. Kay was also an active member of the Ukrainian Catholic Women's League.
The immediate family will be having a private graveside service at Chapel Lawn Memorial Gardens and the service will be officiated by Father Mykhaylo Khomitskyy and Deacon Leon Twerdun of St. Basil's Ukrainian Catholic Church.