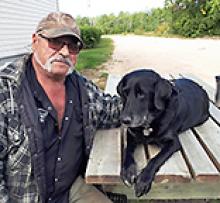 Pain free at last, with Terry holding his hand, Marcel left us and is now able to soar with the eagles.
Predeceased by parents, Bill and Mae; parents-in-law, Pete and Clara; brothers-in-law, Ben and Fred; and sister-in-law Betty.
Survived by wife and other half, Terry and his pride and joy; their children, Donna and Derek; sister Margaret (Doug), brother-in-law Bob (Wendy), sister-in-law Kim and many nephews and nieces, some who always looked to Unc for advice.
Born in Gimli, he lived most of his life in the Homer District, first on the farm that he grew up on and then at his new home with his own family. He was a farmer at heart and was working the land from a teenager. He knew the value of hard work and never shied away from it. He met Terry in August, 1976 and they were married two and one-half months later. Some people thought it would never last but they proved all wrong. They celebrated 44 plus years together. He tried working in Winnipeg after marriage, but lasted only three months. Indoors didn't work for a farm boy. In 1979, they welcomed their daughter Donna and two and one-half years later their son Derek completed the perfect family. Farming, although he loved it, was not the only thing he did. Fixing things, mechanicing, cutting pulp and firewood, trapping and working for Manitoba Highways as grader operator and anything else they needed him to be, for 30 years showed that he was a man of all trades.
Retiring when he was 55, the perfect opportunity presented itself. Doing everything together, Marcel and Terry now went camping to Fairford, trapping in their side-by-side, hunting, ice fishing and they had the chance to farm full-time. Doing what he always loved, he was happy to go for a ride with his dog, his shadow, when Terry had other things to do.
Family meant everything to Marcel. He loved Terry and his kids unreservedly. If he could, he gave them anything and everything that they wanted or needed. Especially his time and love.
Friends and neighbours would always know who was coming when they saw the Suzuki driving slowly down the road. Known affectionately as the mayor of Homer, he kept an eye on friend's cabins in the area. People also knew that, if they needed it, Marcel would be there to help or fix whatever, charging only a handshake or a thank-you. He said "That's what friends do".
Having beat cancer once 33 years ago and two heart attacks, his body was not strong enough this time to beat the cancer.
Again, so in lieu of flowers, please donate to CancerCare Manitoba or to the Manitoba Heart & Stroke Foundation.
Many thanks to Dr. Komolafe and the nurses at the Arborg Hospital for all their care and compassion at this time.
Cremation has taken place and a celebration of Marcel's life will take place when it is safe to do so.