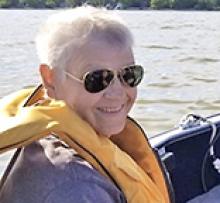 With heavy hearts we announce the passing of our husband, dad and grandpa. Jim passed away peacefully at home following a lengthy illness, on February 23, 2021.
Jim is survived by his wife, Chris; daughters, Mandy and Wendy; granddaughter Nevaeh, light of his life and #1 Dolly, as well as many relatives and friends. He was predeceased by his father Michael Lewick; mother Mary Lamontagne; stepfather Red Lamontagne; sister Carol Burdeny; in-laws, John and Kay Kuz; brothers-in-law, Paul Lavallee and Kenneth Burdeny.
Jim was born in Winnipeg, February 12, 1949. He grew up in Winnipeg, and decided to leave school at age 16. He worked a variety of jobs including E.J. Casey Shows, building rafters in Oakbank, and moving houses with his stepfather. He chose to upgrade his education, and attend apprentice plumbing school in 1968, to become a Journeyman plumber. He started Jim's Plumbing in Gimli in 1974, which he operated up until his retirement in 2017. Jim was well known and respected by his clients and fellow contractors alike.
Jim met Chris in 1966, and it was love at first sight. They married in 1973, and spent 47 years building their life together. Family was important too, as was evident in his pride for his "three girls". His family and friends will fondly remember great times; camping, fishing, curling, card games, travelling and other adventures.
Cremation has taken place. At Jim's request there will be no formal service.
The family would like to express gratitude to our many friends and family for your calls, kindness and support throughout this difficult time. Thank you to the many medical staff that provided care and compassion.
In lieu of flowers, memorial donations may be made to STARS ambulance, as they gave our family the gift of three extra years with Jim.