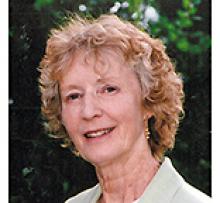 After a long battle with Parkinson's Disease Ann Bays passed away on February 23, 2021, with her daughter by her side.
Ann was the daughter of Hank and Mary Churchill. She used to say she grew up along the #3 Highway; Cartwright, Clearwater, Carmen and Crystal City. As the daughter of a farmer, Ann learned to love the Prairies, riding horseback, feeding the cattle and as one of her favourite songs said, she was, "Home, home on the range."
After high school, Ann went into nurses training and graduated in 1954 from the Winnipeg General Hospital. Back in the day you had to be an R.N. (registered nurse) in order to become an airline stewardess. So, in 1955, having grown up on a farm, and never having flown on an airplane before, Ann set out for an adventure and became a flight attendant for T.C.A. (Air Canada). Ann used to tell the story of how Oscar Peterson was on one of her flights and how Oscar gave all the stewardesses backstage passes to see his concert in Montreal! Exciting days indeed! Not wanting her nursing skills to lapse, Ann went back to being a nurse and worked at hospitals in Minneapolis, Children's Hospital in Winnipeg and she helped set up a nursing unit in Pinawa. Ann made lifelong friends throughout her nursing career, namely June Berg and Margie Thompson who are like her second family.
In January, 1964, Ann married Jack Bays. They went on to have three children, Michael (Sandy), Jacqueline and Barbara (Andre). Ann was always an involved parent and community member. She was a Brownie and Girl Guide Leader. She loved volunteering at the kids' schools and at church. Ann spent many hours shuttling the kids to hockey rinks and swimming pools and she was their greatest fan! Ann was a wonderful cook and often had family and friends together to warm up after a day of cross-country skiing or have laughs at games nights. Ann loved music: Frank Sinatra, Peter Paul and Mary and Leonard Cohen. Ann volunteered at the Health Sciences Centre teaching pre-natal classes and helping with a new mom's drop in called, Cradle Chat. Ann spent time over the years volunteering in Jacqueline's elementary classrooms, helping with reading groups and special crafts. The students were always excited to have a visit from Mrs. Bays! Ann and Jack worked with Jimmy Carter on the Habitat for Humanity Build. Ann was always concerned about giving back to the community, supporting the downtown, The House of Peace with Sister Lesley and Rossbrook House.
Perhaps her greatest joy was witnessing the growth of her five grandchildren, Pam, Katie, Rachel, Jacob and Brendan. Over the years Ann and Jack would have yearly trips to Ottawa to visit the kids and they delighted in playing cards, watching dance recitals or hockey games, reading books together or simply enjoying a good coffee with conversation at the kitchen table. Each summer the family would all spend time at the cottage on Lake Winnipeg. It is there where Ann found joy in the simple things: gardening, walking along the lakeshore, knitting and spending time with family friends. Ann taught her children and grandchildren to respect the Earth, be kind and love others. As we watch the moon over Ponemah and the stars sparkle on Lake Winnipeg, we will think of you and hold you in our hearts forever.
Thanks to Wendy and all of the third floor staff at Golden West for their care and compassion over the years. A special thanks to Darlene and all of the recreation staff at Golden West; your Tuesday night music programs put smiles on the faces of so many residents and it was the highlight of the week for many involved. Thanks also to Susan and Fenella who visited Ann faithfully prior to the pandemic, your visits brightened Ann's days. And finally, thank you to Kelly, Jacqueline's beloved golden retriever, who brought Ann comfort and joy over the last few years. We love you Mom and we will miss you dearly. Rest In Peace.
In lieu of flowers, donations may be made to Parkinson Canada, 7-414 Westmount Drive, Winnipeg, MB R2J 1P2 or Rossbrook House, 658 Ross Ave., Winnipeg, MB R3A 0M1 or The House of Peace, 211 Edmonton St., Winnipeg, MB R3C 1R4.
A Celebration of Life will be held at a later date.