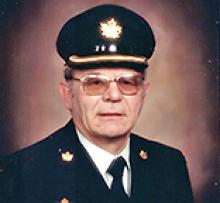 It is with great sadness that we announce the passing of our father, Heinz Ulrich (Uli) August Ewald Thenhaus, at the age of 95. We take comfort in knowing he left us peacefully in his sleep in the early morning hours of February 18, 2021.
He leaves behind his daughter-in-law Trish (Roger); sons, Marty (Kathleen) and Chris {Brenda); grandchildren, Morgen, Damian, Morgan (Kevin), Brenden (Anne), Jessica, and McKenna; great-grandchildren, Corey, Dylan, Brooke and Thèo. As well as his sister Margarete and all his beloved nieces, nephews and extended family members, both in Canada, Germany and abroad.
He is predeceased by his wife of 64 years Anne; sons, Michael and Roger; his brother Wolfgang; and sister Ingrid.
Dad was born in Gevelsberg, Germany the eldest of four children. At the age of 23, he found himself as head of the household, when his father passed away suddenly. Dad's unwavering work ethic and boundless patience would prove to be the cornerstone of the family that he loved so deeply.
He met Anne while working at a local factory where she was an office apprentice.
A chance post war meeting with a Canadian soldier near the towering spires of the Cologne Cathedral would change the course of Dad's life forever. During a conversation over a coffee, Dad mentioned his desire to work in agriculture. The soldier suggested he look to Canada as there was plenty of work in his chosen field.
In April of 1953, Dad came to Canada, followed by his fiancée in November, and on December 25, 1953 they were married.
During Mom and Dad's early married life, Dad worked at a number of places: he drove a cab, learned silver plating at Winnipeg Silver Plating, and was a door-to-door salesman for Rena Cookware. In 1960, he began to work at Shur-Gain, Canada Packers Feed Division, first as a sales rep. He worked his way up through the ranks as Production Manager, Feed Mill Manager, and finally retired as an animal nutritionist in 1986.
Dad was involved with the Air Cadet League of Canada for many years, beginning as a proud parent and volunteer, eventually earning the rank of Lieutenant and becoming commanding officer of 191 West Winnipeg Rotary Squadron.
Over the years Dad enjoyed a variety of hobbies and activities, including building the family cottage. He was a beekeeper, certified under the BEE ACT of Manitoba, and earned the Highest Honours in the Toastmasters 1973 Club Speech Contest. Dad became a master composter, and raised his own worms to learn about vermicomposting. He also made potent wine, which was graciously offered to all guests in his home.
Dad was a quiet man. He didn't say much, but when he did speak it was almost always thoughtful and insightful or absolutely hilarious.
Above all, it is Dad's kindness that will be most remembered. He was the gentlest soul of a human being that you could meet. Always polite and grateful for every moment he had. He will be truly missed.
The family would also like to thank all the staff at West Park Manor, where Dad spent his last years. We are forever grateful for their kindness and professionalism, and providing such wonderful care for our father.
In lieu of flowers, donations can be made on Dad's behalf to the Employee Benefit Fund at West Park Manor, 3199 Grant Ave., Winnipeg, MB R3R 1X2.
A Celebration of Life service will be held when it is safe to do so.