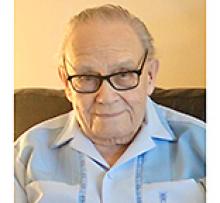 Peacefully on Friday, February 19, 2021, Leonard Helge Berglund passed away at Grace Hospital.
Len is survived by his son, Dale (Marie); grandchildren, Katherine, Kevin, and David (Devon) and great-granddaughter Elena. He is also survived by his sister Elsie Wood (Gerald) and brother Ron Berglund, brother-in-law David "Bob" Donald (Lona), and numerous cousins, nieces and nephews.
He was predeceased by his wife Betty, son Glen, sister Gladys Purvis, brother-in-law John Purvis and sister-in-law Bette Berglund.
Len was a proud member of the RCAF where he worked as an aero engine mechanic. He was stationed at MacDonald, Saskatoon, Gimli, Ottawa, Summerside, and Winnipeg. After retirement he became a member of the ANAF, Assiniboia branch.
While in Saskatoon, Len started learning Judo. At Gimli, Ottawa, and Summerside, he became the head instructor of the base clubs. He received his 1st Degree Black belt while in Ottawa and his 2nd Degree while in Summerside. Besides being the head instructor in Summerside, he was also President of Judo PEI from 1972 to 1975. It was also in Summerside that he and Betty started square dancing and round dancing. They continued this in Winnipeg and travelled to several National Conventions. They eventually discovered American Clogging and introduced it to Winnipeg, Brandon, and several other communities through the Red River Cloggers.
Interment will take place on Friday, March 5, 2021 at Chapel Lawn Memorial Gardens. Covid-19 protocols prevent a full service at this time. It is hoped that a memorial service can be held at a future date.
In lieu of flowers, please make a donation to the charity of your choice.