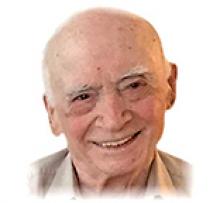 It is with sorrow that we announce the passing of Wasyl (William) Hayowsky, just shy of his 98th birthday.
Our husband, Tato and Dido is survived by his wife of 74 years, Olha; his daughters, Motria Koltek (Terry), Bohdanna Donald (Peter); his six grandchildren, Timon (Christiane), Chrisant (Stephanie), Maxim (Jenny), Christy (Mackenzie), Katia (Kevin), Nikki (Kurt); his eight great-grandchildren, Caroline, Amanda, Alison, Jack, Hazel, Evie, Huck, Mika (and one more due in May); as well as his extended family in Ukraine and the U.S.A. He was predeceased by his parents, Wasyl and Eva; and his five siblings, Ivanka, Olenka, Ivan, Mykola and Myhaylo.
Wasyl was born in the village of Borshevychi, Halychyna, Ukraine, where he spent an idyllic boyhood. At 16 he began to apprentice as a tailor, then left Ukraine a few years later when the war started. As a
post-war refugee, he lived in a Displaced Persons camp in the British zone of Austria near Villach. In 1948 he immigrated to Canada, landing at Pier 21 with his wife and infant daughter. The family settled in Winnipeg and welcomed their second child. Tato worked as a tailor and eventually a letter carrier, retiring from Canada Post after 25 years of service.
The Ukrainian community remained close to his heart throughout his life. Tato was an active member of the Ukrainian Youth Association CYM and a member of the Ukrainian Canadian Institute Prosvita. While chairing the 75th anniversary committee, he focused his efforts on bringing youth into the organization. In addition to organizing touring concerts and cultural events, Tato loved to sing as part of a choir. Tato had a passion for singing. His strong smooth voice rang out in Ukrainian choirs such as the Dumka Choir and the O. Koshetz Choir. A highlight was travelling to Rome in 1988 with the Ukrainian Millenium Choir.
Tato was soft spoken, loving, generous in nature and playful. After getting his first computer in 2005, he could be found surfing the internet, reading newspapers, brushing up on current events, searching for recipes and emailing with his grandchildren. He was in excellent shape, physically and mentally, walking at least an hour every day, often meeting friends for coffee and muffins before bringing groceries home.
Tato was a soccer player in his youth and continued his passion for the sport, watching as many matches as he could over his lifetime. He also continued to master his tailoring art with an eye for design, including eventually creating graduation, wedding and fancy dresses for all his girls.
His greatest pastime and joy, without a doubt, was the time he spent with his family. As his great-grandchildren were born and grew, Dido shared his smile and his twinkling eyes with them, often down on the floor stacking blocks, taking them to the park ... sometimes having to carry them home, kicking a ball back and forth, playing dress up, singing to them and outsmarting them with his tricks.
Dearest Tato and Dido, we will miss you and know you will be in our hearts forever.
Our family thanks all those who provided comfort, kindness and caring as well as Holy Family Nursing Home staff.
Funeral Liturgy was streamed at stvo.ca/live on Thursday, February 25, at 10:30 a.m. CST.
Pallbearers were his grandsons, Chrisant Koltek and Maxim Koltek, granddaughter Christy Donald, sons-in-law, Terry Koltek and Peter Donald and family friend Myroslaw Strembicki. Honorary pallbearers were his grandson Timon Koltek and granddaughters, Katrina Donald and Nikki Donald.
Donations may be made in Wasyl's memory to Canadian Ukrainian Institute Prosvita, 777 Pritchard Avenue, Winnipeg, MB R2X 0E8 or to CancerCare Manitoba Foundation, Room 1160, 675 McDermot Avenue, Winnipeg, MB R3E 0V9.