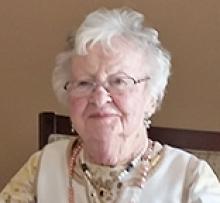 Alice Jean Wilton (nee Abernethy) passed away peacefully at the Oakview Care Home on February 21 at the age of 100.
Alice was born and raised on a farm outside of Glenboro, MB, where she met Gilbert
Wilton and married him in 1942. After a few years, they moved to Fort Garry in Winnipeg and started their family. Alice was very
involved with the Fort Garry United Church and did league bowling at Garry Lanes for over 50 years. She loved to dance, golf, sing and entertain and was known for her good cooking and hospitality. Her door was always open and visitors were guaranteed a cup of tea and something to eat. She was a kind
person who spent her life caring for others.
Alice was predeceased by her husband,
Gilbert, in 2014 after 72 years of marriage, and by her sons, Greg and Ray, who both died in 2001, and by son Cary who died at birth. She missed them every day they were gone.
She will be remembered with love by her daughter-in-law Donna; grandchildren, Shauna, Diana, and Megan (Matt);
great-granddaughter Kate; and her many
nieces and nephews. In particular, Allen and Rita Barker, who provided care and
companionship during her last years, will cherish her memory as well.
Thanks to the caring staff at Oakview Place and at Riverwood Square who showed such kindness to Alice.
A small memorial service will be held at a later date.
In lieu of flowers, donations may be made to CancerCare Manitoba or to a charity of your choice.