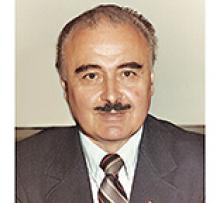 Borislaw Bilash, a longtime educator, linguist and prolific author, who was once hailed as the "patriarch" of the Ukrainian language in Canada, died on February 25 at St. Boniface Hospital in Winnipeg after a short illness. Borislaw had been a resident of Holy Family Home since 2018. He was 91.
Born into a family of teachers, Borislaw spent several decades in and around classrooms before moving into roles in provincial education, tirelessly working to nurture and promote the Ukrainian language and culture in Manitoba and greater Canada. An educator to his core, he would pass on his love of learning to his children: the eldest became a historian, while the other three followed him into teaching.
Borislaw Nicholas Bilash was born in Winnipeg, Manitoba, on May 29, 1929. He was the elder of two sons of pioneer teachers, Nicholas and Mary Bilash (nee Waroway) and the great-grandson of one of the earlier Ukrainian settlers in the Valley River-Dauphin district. He spent his youth growing up in and around Ward, Manitoba, later in Dauphin, Manitoba where he completed high school at a tender age of 15.
His career in education began just three months later, due to a shortage of teachers brought on by the Second World War. Having enrolled in a special summer course to complete the necessary requirements, he found himself back in a one-room school in Grandview, Manitoba - this time as the teacher.
Borislaw would go on to complete further studies in Arts and Education at the University of Manitoba. His expertise was accepted to be the topic of English-Ukrainian Bilingual Schooling, as it existed in Manitoba public schools from 1897 to 1916. It was a passion that would come to define his career. He then was awarded a doctorate degree in Philology as well as a doctorate of Habilitatus at the Ukrainian Free University in Munich, Germany.
After meeting in teacher's training "Normal School", Borislaw married Dorothy Ukena, a direct descendant of the Ukenas of East Frisia (present-day Germany) as well as of the Flamings, Mennonites who immigrated to Canada from the Zaporizhzhia region of Ukraine. Despite not knowing the language, Dorothy learned to speak Ukrainian and became so proficient that she soon became a Ukrainian language teacher in Manitoba.
As an educator, Borislaw served in many capacities. Following years as a teacher and school principal, he began to influence education throughout the province, across Canada, and in the Ukrainian diaspora. During the Ukrainian World Congress in 1968, he became co-founder and first president of the Ukrainian World Congress's (UWC) International Educational Coordinating Council (IECC). He later became deputy director of foreign languages at Winnipeg School Division No. 1, was among those who initiated the bilingual Ukrainian school curriculum in public schools in Manitoba and lectured at the University of Manitoba and at the Ukrainian Free University in Munich. He eventually became a member of Senate of the Ukrainian Free University. During these years, he published numerous books and textbooks on for the Ukrainian language and other languages which continue to influence education worldwide.
Borislaw's love of his own language and culture continued in his own home, where he and Dorothy raised four children to speak Ukrainian as their first language, in the fashion he was raised by his parents, grandparents, aunts, and uncles. It is a trait that he passed on to his children, and they to theirs, so that his great-grandchildren's first language remained Ukrainian.
In 2007, Borislaw was recognized for his contributions to the promotion and maintenance of the Ukrainian language and culture in Canada. It was at this tribute that Ukraine's Ambassador to Canada characterized Bilash as "the patriarch of Ukrainian language in Canada."
Borislaw is survived by his wife of 69 years, Dorothy (nee Ukena), his son Radomir (Lydia Migus) of Edmonton with his children, Kharytia and Mykola (Marta Prystasz) - including great-grandsons, Myrolyub, Metodiy and Mar'yan, Luba (Serhiy Skryabin) of Edmonton, and their daughter Tamila, Daria (Jack Watkin) of Winnipeg with their children, Ivanka, Andrew and Raissa, and his son Borislaw (Natalia Voronka-Bilash) of Millburn, NJ with their daughters, Olesia and Uliana; his brother Dr. Ivan Bilash (Margaret Kuzma-Bilash) of Winnipeg. Also left to mourn are nieces, nephews, cousins, including Elizabeth (nee Wierzbicki) Bilash and Mary Bilash-Zaporzan (William), both of Dauphin, extended family in Canada and the United States, as well as family in the Bilash ancestral village of Zelena, Husiatyn raion, Ternopil oblast, Ukraine.
For those who wish to make a donation in memory of Dr. Borislaw Bilash, please consider the following: National Ukrainian Education Council or Osvita Foundation - Manitoba Parents for Ukrainian Education.
Due to Covid restrictions services are restricted to immediate family only. A limited funeral will take place at St. Vladimir and Olga Cathedral, Friday, March 5, 2021 at 10:30 a.m., followed with interment at All Saints Cemetery. The funeral service will be live-streamed by Korban Funeral Chapel. Further information may be found at www.korbanchapel.com. A memorial service will be held at a later date.