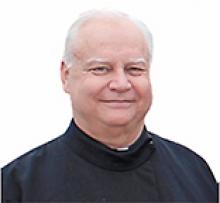 Rev. Emil Kardasinec, a priest of the Ukrainian Catholic Archeparchy of Winnipeg, following the Anointing of the Sick, fell asleep in the Lord on Wednesday, February 24, 2021, at the Neepawa Health Centre, at age 69.
The only child of the late William and Katerine (nee Turkocio) Kardasinec, he was born on March 9, 1951 in Winnipeg, MB. Raised and educated in Winnipeg, Emil was involved in various church and cultural organizations. He was a member of St. Andrew's parish for over 40 years, and served on parish council in various capacities for over 15 years. He attended the University of Manitoba where he majored in Mathematics. He then attended Red River College, receiving a Diploma in Chemical Technology. He worked three years as a Chemical Technician at Canada Packers and 13 years as a Chemical Sales Representative for Rochester Midland Chemicals Ltd.
From 1994 to 1997 Emil took diaconal studies offered by the Archeparchy of Winnipeg, and in January 1998 he entered Holy Spirit Ukrainian Catholic Seminary in Ottawa. Upon completion of his seminary studies Emil was ordained to the diaconate by then Metropolitan-elect Stefan Soroka on December 22, 2000 at St. Andrew's Church. Deacon Emil completed a Bachelor of Theology degree in Eastern Christian Studies at the Metropolitan Andrey Sheptytsky Institute of Eastern Christian Studies granted by St. Paul University (Ottawa) in April 2001.
On August 19, 2001, during the annual Pilgrimage Liturgy at Immaculate Conception Church, Cooks Creek, MB, Deacon Emil, together with Deacon Peter Chorney, Deacon Michael Krochak and Deacon Nestor Yakiwchuk, was ordained to the priesthood by Metropolitan Michael Bzdel.
From 2001 to 2005 Fr. Emil served as pastor at Holy Ghost Parish in the The Pas Pastoral District that included Thompson (St. Joseph) and Flin Flon (Pokrov). Then from 2005 until his passing Fr. Emil served as pastor of the Neepawa Pastoral District, including: Alonsa (St. George), Crawford Park (Ascension), Elphinstone (Pokrov), Erickson (Sacred Heart), Glenella (Sts. Peter & Paul), Glenhope (Pokrov), Horod (Holy Eucharist), Minnedosa (Ascension), Mountain Road (Pokrov), Newdale (Sts. Peter & Paul), Ozerna (St. Nicholas), Rackham (St. John the Baptist), Sandy Lake (Holy Ghost), Scandanavia (Dormition). When his health began to fail Fr. Emil wrote regarding his pastoral ministry: "I would like to serve Christ in my capacity as a priest for as long as I can."
On Thursday, March 4, 2021, from 11:00 a.m. to 1:00 p.m., parishioners and friends from Winnipeg are invited to pay their respects at a visitation at St. Andrew's Ukrainian Catholic Church in Winnipeg, MB (160 Euclid Ave., R2W 2T2). Covid-19 protocols will be adhered to including distancing, wearing of masks and use of hand sanitization. A private Priestly Parastas (funeral service) with clergy only will be held at 1:00 p.m. at St. Andrew's Ukrainian Catholic Church. This service will also be livestreamed through Korban Funeral Chapel's website.
Burial will take place at Holy Family Cemetery in West St. Paul, MB.
Metropolitan Lawrence and Archeparchial clergy will officiate.
Donations in memory of Fr. Emil Kardasinec can be made to the education of priests at Holy Spirit Ukrainian Catholic Seminary, Edmonton, AB, c/o Archeparchy of Winnipeg, 233 Scotia Street, Winnipeg, MB R2V 1V7.

Blessed are they whom you have chosen and taken to Yourself, O Lord, and their memory shall be from generation to generation.
(Psalm 65:5)