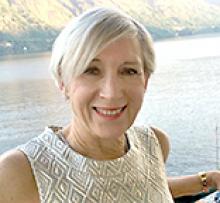 It is with great sadness that we announce the passing of Susan on February 21, 2021 with her family at her side in Dallas, Texas. She had battled breast cancer for four years with great courage, determination, and strength of character.
Susan is lovingly remembered by her husband of 46 years, Jamie; daughters, Lauren Gillette (Jason), Joanna Iliff (David), and Gillian Bradford (Richard); sons, Jamie (Alexandria) and David (Monica); 12 beautiful grandchildren in Dallas, TX and Atlanta, GA; her mother Joyce Alexander in Winnipeg; sister Beverley Ross (David) in Winnipeg; brother Douglas Alexander (Ruth) in London, Ontario; and sister-in-law Judie Gibbs in Rancho Mirage, CA. She was predeceased by her father Doug Alexander.
She was born and raised in Winnipeg, active in the YMCA, and a competitive swimmer with the Winnipeg Cardinal Swim Club. After graduating from the University of Manitoba's School of Physiotherapy, Susan began practicing at St. Boniface Hospital. Following marriage, Jamie and Susan moved to London, Ontario and she began work at St. Joseph's Hospital, supporting her husband's education pursuit.
Her children were all born in Ontario and in 1988, the family moved from Oakville, Ontario to Dallas, Texas after the acquisition of a new business. She managed our new life in Texas, was active in school events, driving to the childrens' sports and activities and she also became a docent at the Dallas Museum of Art. She went "Western" for Dallas' annual charity "Cattle Baron's Ball" but vowed never to pick up the Texas accent or allow her children to say "Y' All" and she and they never did. At the start of every summer, Susan loaded up the Suburban with the five children and two dogs and drove straight North for two long days to reconnect with her lifelong friends at Victoria Beach. She never missed a summer there and even in the Covid summer of 2020, was on daily walks, supported by those same great friends.
In 2010, Jamie and Susan moved to Naples, Florida reconnecting with longtime Winnipeg friends and developing many new ones. She has been very active in the Port Royal Club in Naples for the past ten years and was beloved by staff and friends alike. Her humble, but confident personality and the occasional dry wit was infectious. Susan was also an active golfer at the Hideout Club in Naples and Gleneagles Country Club in Dallas. She loved to travel and with Jamie made many memorable trips to exciting destinations. Golf in New Zealand and a Safari in South Africa were two of her favourites.
Family mattered most to Susan and she was the center of so many wonderful and usually very large family gatherings; organizing, directing, and often cooking for these great celebrations. She was a wonderful mother, grandmother and a strong, devoted life partner for her husband, Jamie. In the end, she had met her goals, and while departing us much too early, lived a full and rewarding life with no regrets.
Cremation has taken place and we are hoping to have a memorial service in Manitoba in the summer if conditions at that time permit.
Should friends wish, a donation to the Canadian Cancer Society or a charity of their choice would be appreciated.