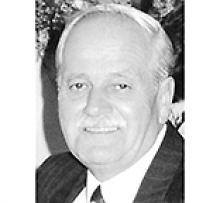 With heavy hearts, we announce that Ronald Hubert passed away on Sunday, February 21, at the Middlechurch Home of Winnipeg, at the age of 80 years.
Ron is survived by his wife Delvina, of 56 years; children, Trevor (Denise) and Ronda; grandchildren, Nate and Milleya; and sister Ann (Doug Ferchuk).
Ron was predeceased by parents, Frank and Barbara Hubert (Zopf).
Ron was a devoted husband and father. He was an active part of his children's lives and played the role of coach and superfan throughout their lives. During his children's sports activity years, he generously gave back to his community by holding many volunteer roles at North Kildonan Community Club.
One of Ron's favourite roles was that of grandfather or 'pappa' to grandchildren, Milleya and Nate. His face would light up when he would see his grandchildren on weekend visits and family gatherings.
Ron worked as a Service Manager at Matthon Motors (and later Winnipeg Volvo) for nearly 40 years. He truly loved the people he worked with and the customers he served. He prided himself on being able to greet his customers by first name and rattling off obscure part numbers for 10-year-old Volvos.
On the weekends in the summer Ron and the family would head out to the 'lake' at St. Malo. He enjoyed spending time in the garden and hanging out with family and friends by the campfire.
The family would like to thank the staff at Middlechurch Personal Care Home for the care they provided to Ron over the final years of his life.
In lieu of flowers, a donation in Ron's memory can be made to the Heart and Stroke Foundation of Manitoba or to your favourite charity.
Ron's family kindly requests that his friends and relatives take a few minutes to honour his memory by visiting his tribute page at ejcoutu.ca.
In accordance with their wishes, cremation has taken place. A private ceremony was held at Coutu Funeral Home. Interment will take place at a later date at St. Vital Cemetery.