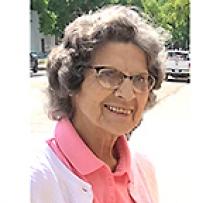 It is with heavy hearts that we announce the passing of Alma at the age of 87 on February 24, 2021.
Alma was born in Lundar, MB and she attended school at Markland and later in Winnipeg. Alma worked in various positions finishing her career at St. John's Ambulance where she met her husband Les. She was honoured with the title of Serving Sister to the Order of the Hospital of St. John of Jerusalem and later promoted to Officer Sister.
She leaves to mourn her passing her stepson Richard (Susan); grandchildren, Danielle (Toban), Erin (Josh), Richard, Caitlin (James); five great-grandchildren, Brett, Layla, Everly, Sutton, and Alec James. Also brothers, Percy (Irene), Bob (Pat); brother-in-law Albert Nelson; sisters-in-law, Margaret and Karen.
She was a favourite Aunt to all of her nephews and nieces.
Alma was predeceased by her husband Les; her parents, Thomas and Ada Roberts; her brothers, Owen (Joan), Arthur, David and Edward. Also by her sister Ruth Nelson, niece Joan Roberts, and nephews, Raymond and Tommy Roberts, as well as all of her Dad's first family.
Alma loved to travel, loved animals and had a great sense of humour as well as a kind heart.
Special thanks to her neighbours and home care workers who enabled her to stay in her home as long as she could. Also special thanks to nurses and staff at Cornish 2.
Due to Covid 19 a private service has been held.
In lieu of flowers, donations may be made to CancerCare Manitoba, 675 McDermot Ave., Winnipeg, MB R3E 0V9.