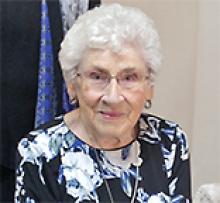 With loving memories, family and friends said their goodbyes to a much loved lady, Colleen Gunn, who passed away on February 25, 2021 at the age of 92.
Colleen was predeceased by her husband Hilliard in 1988, infant son Michael in 1961, and brother Tom Savage in 1997, as well as brothers-in-law, sisters-in-law and a nephew.
She is survived by her daughter Leslie Ann (Robert) Forgie, grandchildren, Andrew (Claudia) and Hilary (Keagan); and great- grandson Owen; her daughter Allison (John) Peterson, grandchildren, Paul and Jane; and her son Bob Gunn; as well as a sister-in-law and many nieces and nephews.
Colleen was born in Regina to Thomas and Sarah (nee Cooley) Savage. Her parents were both from Northern Ireland and met in Regina. Mom grew up in Regina and attended Sacred Heart Academy High School, an all girl's school. She was also part of the Catholic Action young people's group in Regina. After high school, Mom worked at Simpson's in the time office and later worked at the Metropolitan Theatre where she met her husband, Hilliard. They were married in 1957, had four children, and resided in Regina until 1966, when Hilliard was transferred to manage the Capitol Theatre in Winnipeg.
Colleen was a longtime resident of St. James from 1966 onward and volunteered in various leadership positions becoming the Head of the Women's Auxiliary, President of the Silver Heights Community Club, and President of the Chown Guild of the Children's Hospital. Colleen joined the paid work force after the kids became teenagers and became an assistant manager in the boys wear at Sears Polo Park.
Colleen enjoyed many friendships throughout her life and learned to play bridge in the late 1960s with a group of women from Silver Heights, lasting 40 plus years. She also enjoyed making return trips to Regina for visiting family and friends. Her friends from Sacred Heart Academy were very special to her, and over the years Mom attended high school reunions and also her 80th birthday celebration! It was fun to watch these 80 year old "girls" laughing and reminiscing about days gone by.
After Dad's passing when Mom was only 59, she did some travelling with friends, going on a cruise and over to Hong Kong and Singapore. But her most memorable trip was with her brother Tom and his wife over to Scotland and Ireland to visit with cousins. Sadly, toward the end of their trip, her brother Tom passed away suddenly. Mom was so thankful that she was able to enjoy the last three weeks of her brother's life with him in the place of their family roots.
Mom was also a longtime member of St. Paul the Apostle Catholic Church where she volunteered until the age of 90! We all enjoyed a special 90th birthday celebration for Mom at St. Paul's two years ago, a month before Mom suffered a stroke. Her church family was very special to her and blessed her and her family over the past couple of years immensely.
Mom was a loving and generous mom, grandma and friend, a super volunteer, a natural leader and manager of things, a very hard worker, had a great sense of humour and a great laugh. Mom's grandchildren were her greatest joy! She had a very special relationship with them and enjoyed attending their graduations, concerts, musical performances and watching many soccer, volleyball and hockey games. She was resilient through the trials of life. She also survived Covid-19. We are thankful for the wonderful caring people at Simkin Centre Personal Care Home where mom lived for the past two years. Mom's soul is now absent from her body and present with the Lord! Mom, you have "fought the good fight, you've finished the race, you have kept the faith". Well Done!
A memorial service and interment will be planned for at a later date due to Covid-19.
In keeping with Mom's generosity, please consider a donation in her memory to St. Paul the Apostle Church, Heart & Stroke Foundation, or a charity close to your heart.