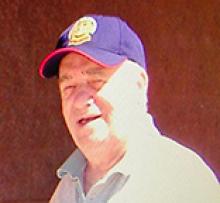 George was born in Tillicoultry, Scotland and immigrated to Canada with his family in 1933. He was predeceased by his wife, Pearl in July 2020, his sister Nessie in 2017 and his brother Ian in 2007.
He is survived by his brother Bryan (Jacqui), son Terry (Pam), daughters, Val (Barry), Lynn (Rick) and son Wayne (Marian). George is also survived by 10 grandchildren, 22 great-grandchildren and nieces and nephews. He was affectionately known as Bomp to his family.
George grew up in Winnipeg. He worked for Fairfield Industries and in 1954, began his long and successful career at Kimberly Clark, where he was highly respected.
George and Pearl met when they were playing baseball as teenagers. They began dating, were wed in 1948 and were happily married for almost 72 years. They resided mostly in Brooklands and St. James and summers were spent at Grand Marais. In the 1960s they acquired two pinball arcades, Funland and Playland and this provided their children an ideal opportunity for summertime employment.
In 1984, George accepted a transfer to Huntsville, Ontario with Kimberly Clark and he and Pearl relocated there. The next few years were a highlight for George and Pearl, travelling often for business and making good friends along the way. Upon retirement in 1989, George and Pearl returned home to Manitoba and built their retirement home at Hillside Beach. While residing there, they became active in the Seniors Centre, participating in card games and bingo. Winters were spent in Texas where they made new friends and had much fun. In 1998, George and Pearl settled back in Winnipeg from Hillside Beach and for the past 16 years they lived with and were lovingly cared for by Jason and Jessie.
George and Pearl travelled extensively over the years with trips across Canada and the U.S., including Hawaii, as well as England and Scotland. In 2004, a trip to Scotland included Tillicoultry, where George visited his birth home, his grandmother's house and reminisced about fishing with his grandfather on the ben at the end of the street.
George enjoyed helping his family, from building decks to building rec rooms and cutting grass. No project was too big for him to tackle and he always supported his children. George loved animals and until his recent hospitalization, enjoyed spending time with his dog Coco.
George was good-natured and the epitome of a gentleman. He demonstrated the utmost in integrity in his words and actions. George and Pearl were an inspiration for their family in how they loved each other and the kindness they extended to others.
At George's request, there will be no memorial service.
For those wishing to do so, donations can be made to a charity of your choice in George's name.

Bomp, you will be forever loved and missed.