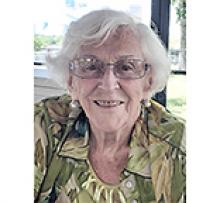 On March 2, 2021, Elizabeth Rose Huppe passed away peacefully in her sleep, at the age of 97.
Elizabeth, known by friends and family as 'Bette', was born in Winnipeg, Manitoba on January 16, 1924 to her beloved parents, Andrew and Winnifred McEwan. She spoke fondly of her childhood, growing up with her siblings, Winnifred, Bill, Graham and Joan. Bette met her husband Harold Huppe at age 15. He delivered groceries to her home, which is when he first caught her eye, and they both attended Hugh John MacDonald and Daniel MacIntyre Collegiate. Harold and Bette married on May 7, 1947 and were married for 62 years before Harold's passing in 2009. Bette had a tenacious spirit; she waited for Harold while he was away serving in the Second World War, writing letters to keep in touch. Upon his return, she worked to support him through nine years of university and law school. Bette was a strong and loyal woman; between her unique sense of style and outgoing personality, she made a lasting impression on people wherever she went. Bette and Harold were both active members of the community. Bette devoted many years volunteering for a number of charitable organizations.
Bette is survived by and will be deeply missed by her children, Eleanor, Allan (Jackie) and Anita (David); grandchildren, Andrew (Tina), Jennifer (Marc), Erin (Julie), Winston (Sabrina), Hannah (Jason), Jacob (Bess) and Amanda (Nikola), her great-grandchildren, Chloé, André, Isla, Charlotte and John; and sisters, Joan and Virginia.
Bette was lucky to live a healthy life well into her 90s, and found peace in her final year, saying often how wonderful her life has been. In her own words: "I would do it again in a minute, with another 97 years!"
We would like to thank the staff at both Concordia Village and Middlechurch Personal Care Home for the wonderful care they gave Bette in the last 10 years.
Cremation has taken place and a private service will be held with immediate family.
A donation in memory of Bette can be made to CancerCare Manitoba or Khartum Shrine Ladies Auxiliary.

We love you, rest in peace.