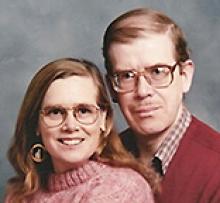 Murray Roland Ward, aged 69 years passed on Saturday, February 27, 2021 after a ten year war with Parkinson's Disease. He was a resident of The Middlechurch Home where the staff took wonderful care of him as Parkinson's won battle after battle over him.
Our thanks go out to the staff of Ward 2B for their care.
Murray was born in Toronto on May 10, 1951. His parents were Macrina and Roland (Bus) Ward both veterans of the Second World War. They decided to move back to Winnipeg when he was four years old. He went to school at Faraday and Sisler High. He continued his education at the University of Manitoba (B.A.) and at Red River Community College (Library Tech). Murray joined the staff of the Dafoe Library at the University of Manitoba and spent 25 years there. Murray had to take early retirement because of early Parkinson's onset.
In 1986, Murray married the love of his life, Laura Webb. He was devoted to Laura and they did a lot of travelling around Canada and the United States. Murray became an expert on comics. People would email him from around the world for his opinion and advice. He wrote many indexes on comics that were very successful.
Murray had three sisters, Brenda and children, Tara, Tricia and Sean; Gloria Meyer, husband Brian and children, James and Jodie; Ellie and sons, Matthew and Ryan. Murray was predeceased by his parents, and sisters, Brenda and Ellie.
Murray will be missed by his wife Laura; his special friends, Ian and Cherrlyn Thomson, Walt and Diana Sterdan, Tony Hazzard, Ann Nichols, his pen pal in Arizona, and many other dear friends.
Due to Covid-19 restrictions, a private Funeral Mass has been celebrated at St. Alphonsus Roman Catholic Church with Father Greg Mulligan OFM Cap. presiding. Interment followed in Brookside Cemetery.
In lieu of flowers, donations may be made in Murray's memory to Parkinson Canada in Manitoba, 7 - 414 Westmount Dr., Winnipeg, MB R2J 1P2.